Mediavision has compiled the subscriber development during the first half of 2017 for the five major traditional pay TV operators in the US, compared to that of OTT service Netflix. 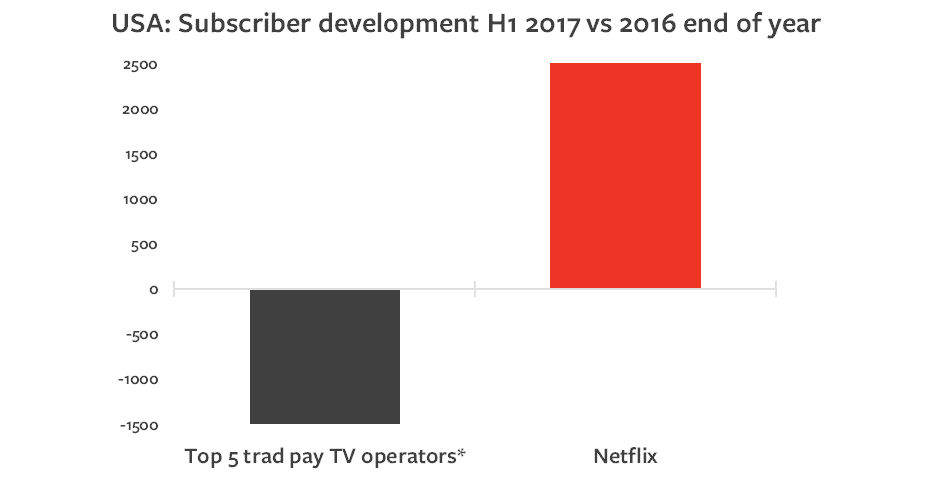 In attempts to counter this development, and eventually capitalize on the digitalization of the TV industry; several traditional operators are moving into the OTT space. AT&T’s online streaming service DirecTV Now added about 300’ subscriptions during H1 2017 vs end of year 2016, and DISH’s Sling TV added around 250’ in the same period. However, these services still have a long way to go before completely offsetting the drop in traditional pay TV subscriptions, and catch up with competitors like Netflix, Hulu, and Amazon. Furthermore, actors are trying to maintain consumer interest toward traditional pay TV channels through “skinny bundling”. This could mean either offering an á la carte selection of channels or excluding certain expensive channels (often sports) to offer packages at a cheaper price.

Further efforts to thwart traditional TV decline includes CNN setting out to reach a younger audience through a cooperation with Snapchat. Snapchat has also emphasized its focus on mobile video content, following a rather lengthy negative development on the stock market for the parent company Snap Inc.

In the Nordics however, there’s no clear decline of subscribers in the TV market, as IPTV and digital cable keep growing, offsetting the decline in satellite and terrestrial television subscriptions. Regardless, the effects of digitalization are increasingly visible in the Nordic markets as well, as most pay TV operators employ their own OTT service, or include an existing service in their own infrastructure (eg including Netflix or HBO Nordic in set top boxes or own apps).