Apple’s newfound focus on AR from a Nordic perspective

A few days ago, Apple held its keynote during which the company released several new products and a brand-new focus on augmented reality (AR). Rather than virtual reality (VR), AR has proven to be the technology of choice for both Facebook and Snapchat – and now Apple.

According to Mediavision, approximately 7% of Nordic HHs have a VR device today, showing no growth so far during 2017. Thus, the Nordic VR market has yet to take off. Considering Apple being the market leading brand for both smartphones and tablets in the Nordics, Mediavision believes that the company focus on AR has the potential of being the spark that ignites a new mainstream consumer market with AR. 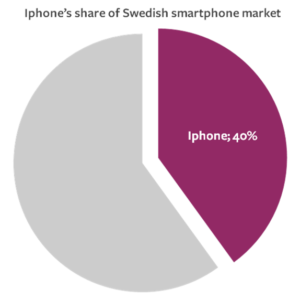 First Nordic company to try to capitalize on this development is Ikea, which recently announced the app; Ikea Place. Together with Apple, Ikea has developed an AR app to be released on September 19th which lets the user place furniture in the space in front of them using the camera on their Iphone/Ipad. Ikea expects this will boost sales as an increasing number of consumers are introduced to the technology of AR.

Moving forward, we will most likely see more commercial uses for AR technology. The Nordic consumers’ interest is surely set to peak as AR becomes readily available in peoples’ smartphones and tablets – reaching a majority of the Nordic population virtually instantaneously.

Mediavision follows the media industry development with a focus on digital media on the Nordic markets. We perform personalized projects and thorough analyses (many of which are found under Publications).