Summer is definitely here and for many, this also means time to catch up on SVOD series. So, this week we look a bit closer at the quantity of titles available on local vs global OTT services. It is also interesting to follow the global giant Facebook/Instagram, that recently announced reaching 1 billion daily users. Last week, IGTV (Instagram TV) launched; a clear Youtube rival. And right after finalizing the acquisition of Time Warner, AT&T announced its’ entrance into programmatic advertising, through platform Appnexus. It seems there will be no slow summer for online video this year.

Another perspective to this development, is to look at supply of content. Mediavision recently published The Inventory Insight, encompassing all streaming services in Scandinavia (global and local). In terms of volume, the American giants are clearly dominating – with a considerably larger supply of content. They have a content library almost twice the size of local actors (sports and news excluded). Genres such as scripted series and movies are especially skewed in their favor. E g, +70 percent of all movie titles on the Swedish streaming market belong to Netflix, Amazon or HBO. 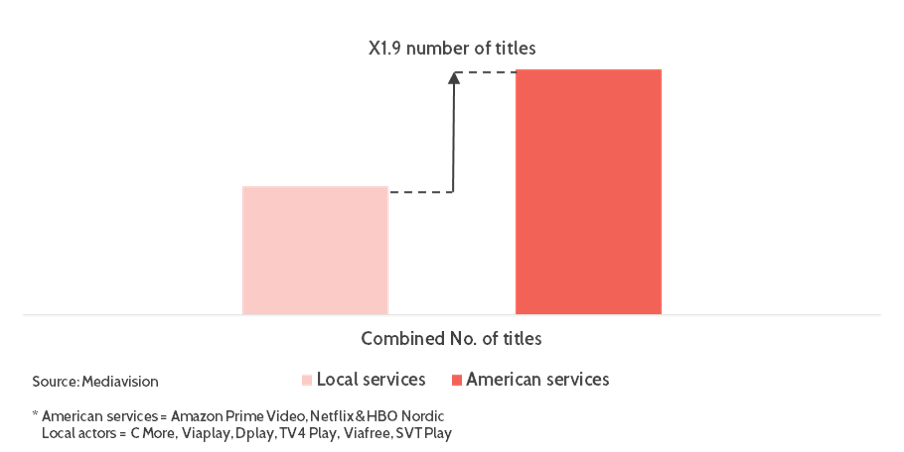 The picture changes somewhat when looking at non-scripted content supply. Here, local services are a lot closer to the likes of Netflix. This is also reflected in runtime (quantity measured in minutes) where the majority can be credited the local services. Documentary/factual and entertainment make up the majority of total runtime, mainly for local AVOD services whereas the “globals” dominate the scripted genres (both in titles and runtime).

AT&T acquires ad platform Appnexus
AT&T has confirmed that it is buying the programmatic advertising marketplace AppNexus, probably in order to monetize its content following the 85b USD Time Warner acquisition which just closed weeks ago. AppNexus is reportedly valued at about 1.5 billion USD.

Amazon Prime Video added to BT TV
Amazon Prime Video is now available through BT’s set-top boxes in the UK. Consequently, BT is the only operator that can provide access to all three Premier League rights holders from the 2019/20 season.

Hulu inks exclusive Viacom deal
Hulu has picked up rights to stream full series from Viacom, including Daria, Nathan for You and more. The deal also includes content from Nickelodeon as well as 20 films, including School of Rock.

NENT Group inks deal with Adult Swim
NENT Group has inked a deal with Turner-owned network Adult Swim. In the US, Adult Swim is claimed to be the leading network in basic cable with audiences 18-34 and 18-49. On August 1st Adult Swim will be available on Viafree in the Nordics.

China blocks HBO after parody of Xi Jinping
HBO’s website is blocked in China following British comedian John Oliver’s parody of president Xi Jinping. HBO has not responded to requests for comment on the censorship. In the show John Oliver compared Xi Jinping’s figure to Winnie the Pooh.