As many of us are now returning to work after a splendid summer, we’re taking a quick glance at the development of the 2018 traditional TV viewing so far. It’s of course with a special focus on summer ratings, particularly since Sweden this year outperformed all expectations and made it to the quarter finals in 2018 FIFA World cup in July.

And clear enough, the graph shows how the major sports events positively impact on a generally decreasing audience development. This goes both for the Winter Olympics in February (Discovery Networks) and FIFA World cup in June-July (public service SVT and commercial TV4).

Zooming in on the weeks of the FIFA championship and comparing with the weeks of FIFA in 2014, viewing minutes decreased by -9% in 3+. In the target audience 15-24 year-olds, the viewing decline is -43% comparing the FIFA weeks of 2014 and 2018. But this is still less than the average drop in the same group (-49%, January-July 2014 vs 2018), so without doubt, the World cup has a significant value in slowing down the decline. Meanwhile, in the other end of the age scale, 60+ instead increased their viewing minutes by 7%. 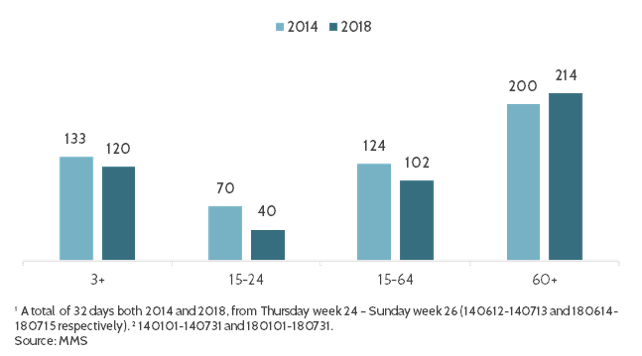 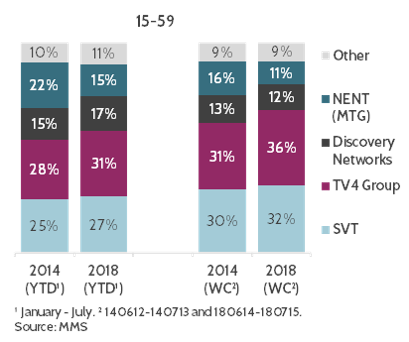