Sports content is of crucial importance to any pay TV operator; it generates loyal customers (“retention”) and keeps ARPU (average revenue per user) levels high. But sports also carry exceptional value as a driver for live TV/video viewing. All in all – sports rights are extremely valuable assets. So how do the consumers rate the different sports and leagues? This week we also take a look at gambling and what operators attain the highest share of active gamblers.

Sports rights are a very powerful tool in the hardening battle for eyeballs. Sports fans are loyal to their favorite leagues and teams and exert a high willingness to pay for that content. Furthermore, consumers with an interest in sports, make up a sizeable share of the market. Looking at the Swedish market, 2.8 million (38%) consumers express an interest in watching sports.

Looking at the 15 most valuable sports rights in Sweden, Mediavision can conclude that international football has a very strong position. The highest single value among consumers is given to Champions League. Swedish sports leagues such as Allsvenskan and SHL also ranks high among consumers. Read more on our full analysis on the sports rights market here. 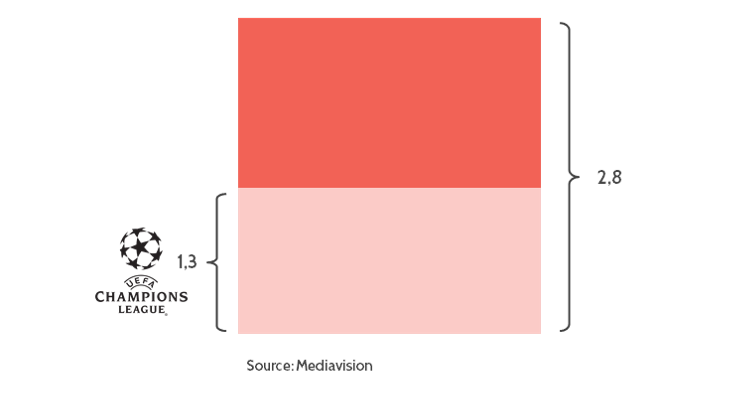 Gambling: State-controlled Swedish operators with the most active gamblers
As the re-regulation of the Swedish gambling market lies just around the corner, the off-shore regulated actors are upping their efforts to strengthen their positions. Over the past 12 months, a majority (60%) of newly registered gambling accounts are with off-shore brands.

However, the Swedish brands attain a higher share of monthly active gamblers. Between 50-60 percent of registered customers on Swedish services, gamble on a monthly basis. Comparatively, off-shore services average a monthly activity of 35-45 percent among registered customers. The higher activity among Swedish brands is explained in part by subscription-based offerings which have proven successful.

As the playing field levels on January 1st, 2019, all actors will compete on equal terms for the first time. Will the state-controlled actors retain their market leading positions?

Swedish households spend more than 330 SEK per month on video and TV subscription services
Video streaming services have grown rapidly during 2018 and the third quarter of 2018 is no exception. This in turn leads to a significant increase in the combined household spend on TV services.

Channel 4 to launch news show on Facebook
Channel 4 has partnered with Facebook for a weekly news show following the global launch of Facebook Watch. The show Uncovered will focus on a single major international issue each week.

Telia eyeing SF Studios
According to news source Breakit Telia is looking to acquire SF Studios as part of it strategy to become a combined telco and media company. SF Studios is owned by Bonnier who recently sold its TV business to Telia in a deal which is expected to finalize during 2019.

Norwegian video subscription revenue rising
According to a report by Medietilsynet commercial TV actors upped their revenue mainly through subscription fees. During 2017, sales derived from channel packages and streaming services summed up to 47% of the total TV revenue, surpassing ad revenue.

Facebook takes on Linkedin
Facebook has over the last year slowly been encroaching on Linkedin’s territory. Facebook has launched a new education portal, Learn with Facebook, and its expanding features for the already existing portals Mentorships and Jobs.

Spotify launching in the MENA region
Spotify announced its launching in 13 new countries in the Middle East and North Africa. Spotify is launching dozens of locally curated playlists along with an Arab Hub to gather Arabic music for its global audience.

Sweden: over 50% use SVoD
Swedish consumers’ appetite for video streaming is high. During the third quarter of this year a majority (51 per cent) of households in Sweden subscribe to at least one streaming service, a yearly growth of almost 30 per cent, according to Mediavision.

Swedish streaming keeps momentum
Cord-cutting may be blighting the US pay-TV arena but competitive pricing has seen one of Europe’s key markets, Sweden, maintain its potential and show that consumers’ appetite for video streaming is high.