The European Parliament is soon to vote on increased consumer protection, for example when purchasing digital content such as TVOD (transactional video on-demand) and SVOD. So, on that subject: How satisfied are the Nordic consumers with their online streaming services? And, how would the new EU proposition make a difference?

Mediavision is following consumer satisfaction in the Nordic households regarding subscriptions on TV and streaming. On an overall level, the consumers are more pleased with their streaming subscriptions than with traditional pay TV, but with significant differences between the actors. Another interesting finding, maybe not surprising, is that satisfaction correlates closely both to the Net Promotor Score (NPS) and to actual churn. There are also indications from several sources that internet speed and stability play an important role; high-speed fiber households being more satisfied than those with slower connections. Keeping the customers happy will become more and more important as the SVOD market matures and penetration levels push towards 60% in the Nordics.

NPS in the Nordics, SVOD average and Netflix, Fall 2018 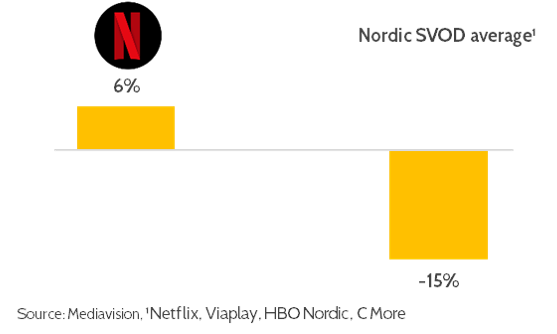 Meanwhile, the market is getting increasingly crowded. The latest actor to officially reveal its entrance is Apple. Along with a credit card and a gaming service, the company announced its streaming service Apple TV+ on Monday.

If the EU proposition on increased consumer protection is voted through and implemented, customer retention and satisfaction will probably play an even more important role – faulty products and services would then cause a greater backlash. Adding to this the EU content quota regulation, 2019 looks to be a momentous year for the streaming industry.

EU passes vote on controversial link tax
On Tuesday the EU Parliament passed the vote on the controversial article 11 and 13, commonly referred to as link tax and internet filter. The immediate effects remain unclear, but Google has said its news search function may be shut down.

NENT IPO draws near
NENT Group is expected to make an entrance on the stock exchange on March 28th. The MTG stock has traded without the right to NENT stocks since Monday. Morgan Stanely values NENT at SEK 13.4 billion.

La Liga launches OTT service
Spanish top football league La Liga has launched a new OTT TV service that offers a range of sports. The service which will mostly be available free-to-view is intended as a way to distribute coverage of multiple sports disciplines.

Danish media skeptic toward Apple News+
Jysk Fynske Media, TV 2 and Egmont find it hard to see the appeal of Apple’s news subscription service, Apple News+. The main reason being the low monthly cost of $9.99. Apple News+ will initially be launched exclusively in the US.

Global VoD providers have 39% of Nordic subscriptions vs 72% in rest of Europe
Domestic video providers have a relatively large share of the Nordic market compared with the rest of Europe, according to consultancy Mediavision. It said Netflix and Amazon Prime Video […].

US giants take “just” 40% of Nordic streaming market
The Nordic region is seeing local players able to rise above the challenge of US streaming giants Netflix and Amazon. Stockholm-based consultancy Mediavision found that between them […].