Fiction and drama the name of the game so far – but change ahead?

2018 was a record-breaking year on the Swedish TV market in several aspects. Both advertising and pay revenues demonstrated a strong growth, especially so regarding digital. As always, content and viewing are main drivers – which also makes 2019 highly interesting as the market continuously is getting more and more crowded. So, this week we’re delving into genres and viewing. 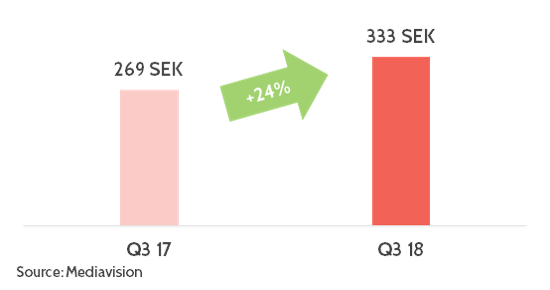 We all know that fiction is taking a large piece of the pie both in traditional and online viewing. As Mediavision has pointed out, local Big Budget productions such as Vår tid är nu, Bron and Det som göms i snö have been essential in this. But now we also notice that entertainment is picking up and increases in share of online viewing. In 2018, the entertainment genre grew by +35% YOY in SOV, highly driven by AVOD services.

Spotify tests voice assistant for cars
Spotify will run tests of a smart voice assistant designed for cars in order better understand how people consume audio while driving. The voice assistant called Car Thing is plugged into the cigarette lighter, the driver then addresses Car This with the phrase “Hey, Spotify”.

Nenda launches B2B streaming service
The newly launched company Nenda is launching a streaming service which is strictly aimed at businesses. Nenda has received SEK 5.5 million in a funding round and has taken aim at hotels, two hotel chains in Sweden have agreed on trying the service.

Tencent acquires Swedish games studio Sharkmob
Chinese tech conglomerate is acquiring the Swedish games developer Sharkmob based in Malmö. Sharkmob was founded in 2016 and has yet to release a game, the sum of the transaction was not reported.

Swedish TV market breaks new records
The Swedish TV market has seen its strongest growth in eight years. According to Mediavision, the SVOD market grew by 45% alone between 2017 and 2018, with ad-funded video on demand also making a major contribution.