With 3 million monthly viewers across the Nordics, e-sports and gaming is evolving into a mainstream genre. Appetite for content and willingness to pay remains high among the consumers and a significant share of viewers also expresses an interest in following and watching a broad spectrum of leagues, tournaments and events.

Explosive growth and a heavily sought-after core demographic of young men continues to characterize the e-sports and gaming market as appetite for content is vast. Mediavision’s Nordic E-sports & Gaming Insight 2018/2019 concludes that e-sports and gaming attract more than 1.2 million daily viewers across the Nordic region, approximately 200’ more than traditional sports online. On a monthly basis, Nordic e-sport and gaming viewers amount to a total of 3 million. This means that the number of Nordic monthly viewers has doubled (+50% YOY) over the course of two years. 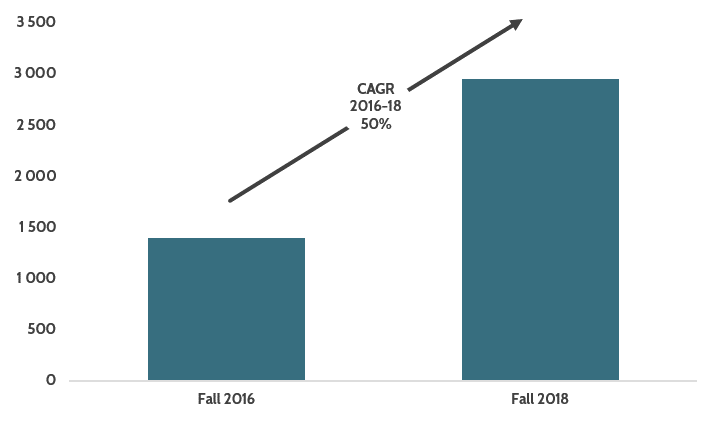 Viewership growth is furthermore likely boosted by an increasing number of well-organized events, on all fronts of the e-sport as well as gaming market. 70% of the viewers express an interest to follow various leagues, tournament and events, among which Dreamhack qualifies as the most popular. Following, the events ESL and Blizzcon were the second and third most popular.

Share of monthly viewers with expressed interest in leagues/events 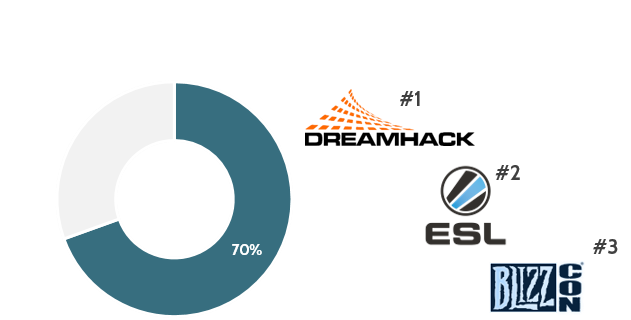 As one of few market dominating platforms, Twitch reached 41% of daily Nordic e-sports and gaming viewers in the fall of 2018 (stable YOY). During the third quarter of 2019, battle royale game Fortnite was still the most viewed game on the platform. League of Legends followed, and World of Warcraft which saw a heavy surge in viewership during the quarter due to the release of WOW Classic at the end of August.

Mediavision continues to closely monitor the developments within this exciting industry. Our latest analysis on the topic Nordic E-sports & Gaming Insight 2018/2019 is now available for order.

Storytel Results Exceed Forecast
During the third quarter of 2019, Swedish audiobook service Storytel had approximately 1 million subscribing customers. This figure exceeds their own prediction and amounts to revenue from streaming of 399 million SEK.

Instagram Launches Messaging App
The new application Threads by Instagram was launched last week. The basic functions of Threads closely resemble those of Snapchat, but also provide the opportunity to share locations and statuses. The launch caused Snapchat´s share to fall by 5.3 %.

Disney Bans Netflix Advertisements
The most recent development in the streaming war concerns advertising. Disney has reportedly decided to ban advertising from Netflix on all of their entertainment TV networks, since they failed to see a mutually beneficial relationship as Netflix doesn´t run ads.

The Norwegian Government Invests in Journalism
The Norwegian government has announced a 30 million NOK increase of the support to news media and local journalism. According to the Minister of Culture, the support should mainly be devoted towards sustaining good conditions for minor, local newspapers.

TV2´s Humor Channel to be Cancelled
As of next year, Norwegian channel TV2 Humor will be cancelled. The decision was taken in accordance to TV2´s strategy and the developments in the industry, especially the migration of viewers online, according to their channel director.

Bookbeat Increased Revenue by 127%
Bonnier´s audiobook service Bookbeat reports an increase in revenue of 127% during the third quarter of 2019. Bookbeat was launched in Sweden and Finland during 2016 and currently has more than 100 000 paying subscribers.

Apple Has Cancelled iTunes
Nearly 20 years after the launch in 2001, Apple removed the iTunes application from their devices this week. As part of their strategy regarding the development of their individual media arms, Apple has decided to only provide individual apps for Music, TV and Podcasts.