A few weeks ago, Mediavision reported on the growing interest in advertising-based video on demand (AVOD) in the Nordics. This week, we take a closer look at the growth factors behind the Swedish 2 billion SEK AVOD market.

AVOD, i.e advertising-based video on demand, has attracted great interest lately, spurred by the transformation from traditional ad TV viewing. New services – both mixed funding (ad/subscription) and pure advertising – have been launched. As consumers are turning to AVOD services, the ad spend is following. Since 2010, AVOD revenues in Sweden have grown past 2 billion SEK. 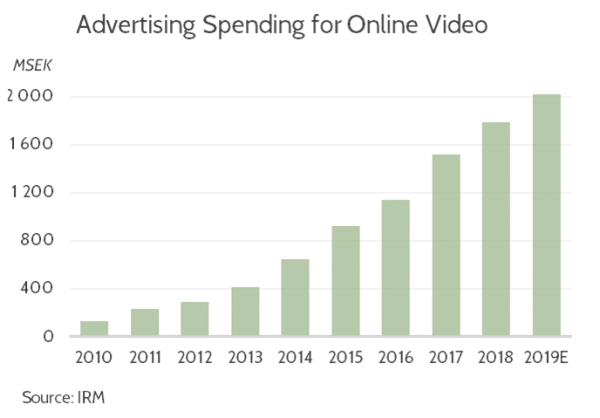 The average annual growth rate (CAGR) of the AVOD market (revenue) between 2013-2019 amounts to +30 percent. This is higher than the growth of viewing (CAGR 17 percent) over the same period. The residual revenue growth is driven by a price increase. However, the cost of AVOD advertising in Sweden has been increasing at a slower rate than viewing so far. Hence, the AVOD-market has primarily been driven by increased viewing, during this 6-year period. The opposite is true for traditional TV where the Swedish TV ad revenues have grown in spite of the viewing decline – the TV ad prices have been more than compensating for the loss of inventory.

One particularly interesting actor, fairly new in AVOD, is Instagram TV (IGTV), owned by Facebook. The platform nearly tripled its average daily reach in Q3 2019 vs Q2 2019 (from 3% to 8%). 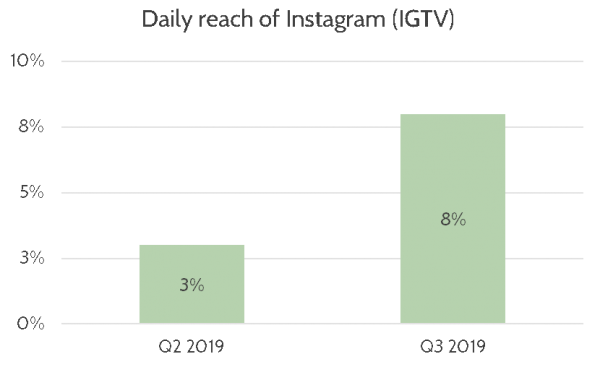 Last week, one demonstration of the platform´s immense popularity even made headlines. Namely, Jennifer Aniston created an account and gained 1 million followers in 5 hours and 16 minutes. This set a new Guinness World Record for most followers gained on Instagram in the least time.

In June 2018, Instagram launched its’ video platform IGTV, both in-application and as a separate app. IGTV was soon identified as a direct competitor to YouTube, allowing users to upload videos up to 1 hour long (as opposed to the limit on original Instagram of one minute). In May 2019, IGTV had a facelift and was adjusted to suit the users’ preferences, utilizing AI to provide more personalized content. Instagram TV´s online video SOV in Sweden amounted to 2% in Q2 2019 and 5% in Q3 2019.

On a growing market, there is bound to be an increase in competition. In terms of viewing, the Nordic AVOD market has long been dominated by global actors, and with Instagram/IGTV’s popularity the competition is ramping up. However, local actors account for a large portion of the more ad-friendly, licensed, content (as opposed to user generated). This results in locals accounting for a larger share of market revenue than they do viewing. Furthermore, considering the developments in the US market, we will likely see a surge in competition also on the licensed content side of the Nordic AVOD market.

HBO Confirms Price for HBO Max
On Tuesday, HBO revealed the price setting for their upcoming service HBO Max. The new service will be priced at $14.99 in the US, the same as their current service HBO Now. This strongly contrasts the much lower price points of upcoming Apple TV+ and Disney+.

Banijay Group Acquires Endemol Shine
Banijay Group has acquired Disney-owned Endemol Shine. The deal will have a large impact on the Nordic market since several Nordic production companies are part of Endemol Shine, including for example Mastiff, Jarowskij, Metronome and Meter.

MTG Sells Zoomin TV
Swedish MTG has decided to sell their ownership of the global media- and entertainment company Zoomin TV. The shares, amounting to 100% ownership of the company, will be sold to tech company Azerion.

AT&T Provides Free HBO Max
In an effort to reach the goal of 80 million users in 2025, AT&T has decided to provide 10 million American customers with access to the new streaming service HBO Max free of charge for one year.

Positive Results for Spotify in Q3
As Spotify released their figures for Q3, the positive result caused their stock price to increase. During the third quarter, Spotify generated sales of EUR 1.73 billion, corresponding to an increase of 28%, surpassing analysts’ estimates.