Newsletter 13th of November: The Decade that Marks the Loss of a Generation

With 2019 soon coming to an end, we can conclude that the past decade probably has been one of the most spectacular ever for the media industry. One way to illustrate this, is by showing the drastic transformation among young viewers. The trend is similar all through the Nordics.

Already at the very start of this decade, in 2010, the Swedish Media council pointed at a shift in viewing habits among younger audiences. Broadcast viewing was dropping but on the other hand, internet usage was increasing rapidly. As we have seen so many times before, behaviour of early adopters quickly became mainstream.

Online viewing and streaming services have grown at a very quick pace, especially post Netflix´s Nordic launch in Oct 2012. For example, in 2016, 60% of 15-24-year olds in Sweden watched video online and the viewing was mostly driven by these new, global streaming services.

Today, we find ourselves in a maturing video market with low viewing figures for younger demos in traditional broadcast, but on the other hand a substantial daily reach as well as viewing minutes allocated to online video. In Sweden, average daily viewing among 15-24 year-olds have declined with a staggering 71 minutes (or -71%) in the first three quarters of 2019 compared to the same period in 2010. In Finland, viewing has dropped by 58 minutes, comparing Q1-Q3 2010 to Q1-Q3 in 2019. In Norway the corresponding figure is 111 minutes, and in Denmark the decline is even larger, at 134 minutes. 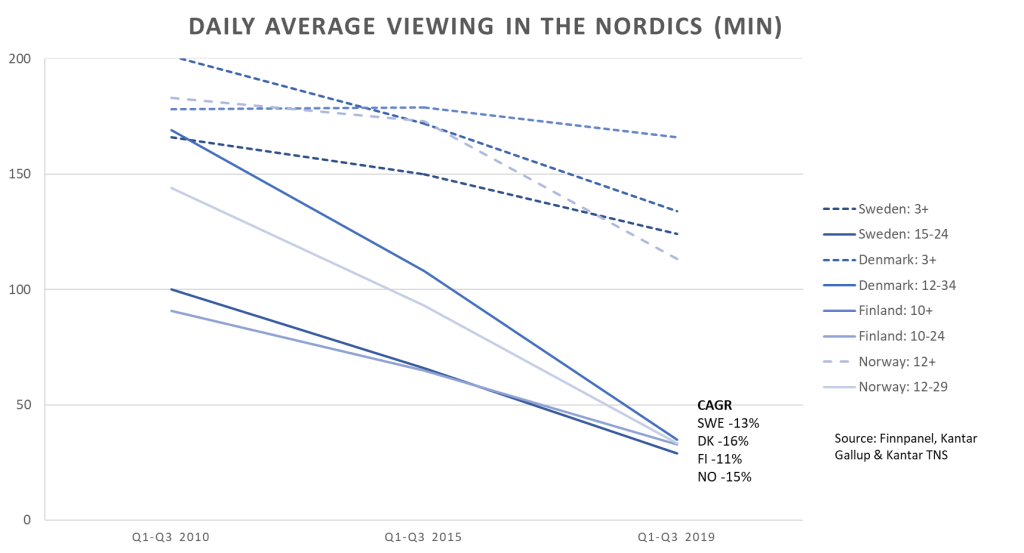 The drop in traditional viewing in young demos, is by no means exclusive for the Nordics. BBC recently reported that for the first time, less than half (49%) of the 16-24-year-olds in the UK tuned into BBC´s TV channels an average week. As this decade comes to an end, it is safe to say that the younger audiences have radically changed their consumption patterns and are primarily consuming video through other devices and platforms than traditional TV. In Q1-Q3 2019, online video consumption constituted three fourths of the average daily consumption of video among 15-24-year-olds in the Nordics.

EC Approve Telia’s Acquisition of Bonnier Broadcasting
The European commission has given their approval to the deal between Telia and Bonnier Broadcasting, with reservation for concessions. According to Telia, the acquisition will result in synergies of 600 million SEK per year from 2020.

Record Viewing for C More´s Gåsmamman
The premier of the fourth season of action drama series Gåsmamman has been well received by viewers on C More. According to C More, the series is the most successful ever on the platform, both in terms of viewing time and number of users.

BBC and Sky Enter Partnership
The leading pay-tv provider and free-to-air broadcaster in the UK is entering a partnership that extends across both content and technology.

Fullrate-customers Also Lose Discovery
Customers of Fullrate in Denmark will lose access to Discovery´s TV channels starting next year. Fullrate is owned by TDC, which has been in conflict with Discovery during the fall.

Disney+ Reveals Further Launch Dates
On the 12th of November, Disney+ launched in the US, Canada and the Netherlands. Further launch dates have now been revealed. On March 31st, Disney+ will launch in the UK, France, Germany, Italy, Spain and additional, not yet named countries in Western Europe.

Podimo Partners with Berlingske Media
The new podcast service Podimo has entered its first media partnership, with Danish media house Berlingske Media. The partnership entails that Radio24syv´s back catalog and newly produced programs will be available through the service.

The launch of Apple TV+ and premier of their original productions generated moderate levels of demand on the US market. Only “See” managed to make the top 20 list of audience demand levels for the day following the premiere of new streaming shows in 2019.