Audiobook streaming services are growing fast in the Nordics, attracting not only an increasing number of paying households but also new actors. The market is still young and characterized by strong competition. The churn factor, i.e. subscribers leaving or switching  between different services, is very high. This implies challenges going forward.

The Nordic audiobook market continues to set new records, with subscribing numbers all through the Nordics climbing fast. Daily reach (“reading/listening”) among 15–44-year-olds’ is approx. 9% on average across the region. As we have seen before, a thriving market attracts new actors – also the case here. During the last years, competition on this market has become fierce. 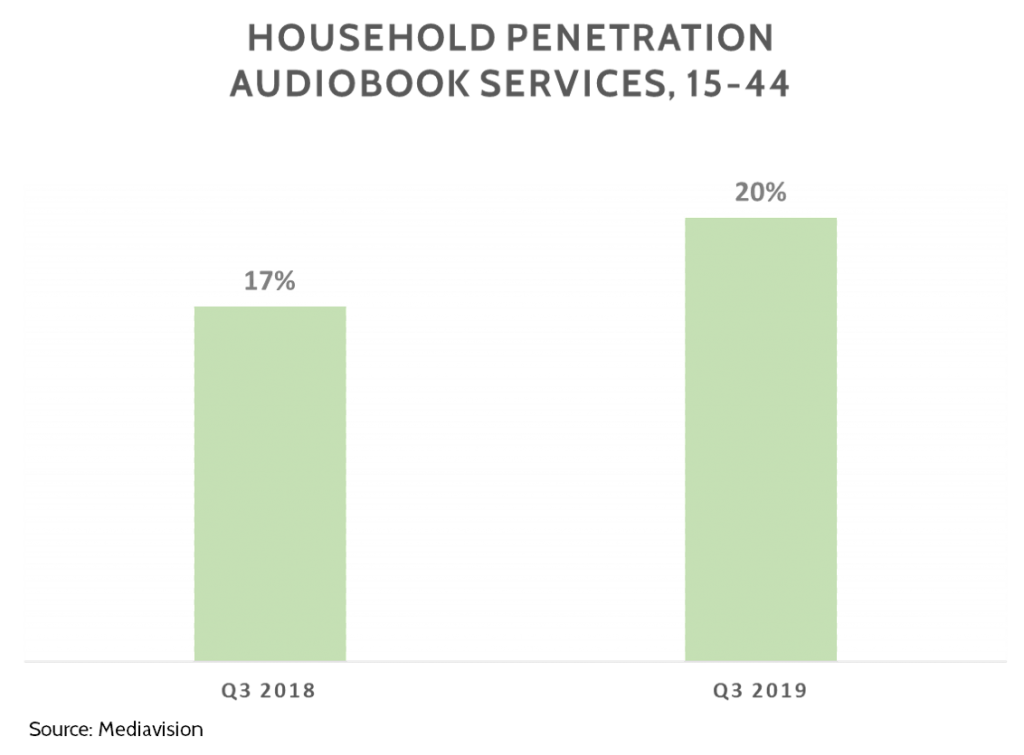 Strong competition is also spurring a substantial churn. Only half of all subscribers are planning to retain their accounts during the coming 12 months. Many customers are aware of their strong bargaining position as they can easily go price-hunting, with content offerings more or less identical over the different services. Churn is likely one of the most important KPI:s for this market segment and necessary to address in order to see a continued growth. Especially as actors like Spotify are increasing their investments in non-music content, becoming a potential substitute to the audiobook services.

Google Launches New Gaming-Platform
The premier of the fourth season of action drama series Gåsmamman has been well received by viewers on C More. According to C More, the series is the most successful ever on the platform, both in terms of viewing time and number of users.

Podcast Index to Launch in Norway
The Norwegian audio market is about to launch an index of podcast listening, similar to the predecessors in Denmark and Sweden, following an initiative of NRK. Originally, the official launch was set this fall, but it has now been postponed to the 14th of January.

TikTok to Launch Streaming Service
Chinese Bytedance, owners of the popular app Tiktok, are about to release a streaming service for music, competing with Spotify and Apple Music. Currently, the company are in the phase of negotiating with the major labels globally.

Kantar Sifo Acquires KIA-Index and Poddindex
Starting in January 2020, Kantar Sifo will be in charge of the technical measuring currency for internet- and mobile traffic, KIA Index, as well as Poddindex. Previously, the measuring has been conducted by Sveriges Annonsörer.

Gannet and GateHouse Set to Merge
Two of the largest newspaper chains in the US are set to merge following a deal completed last week. The combined company will now own more than one-sixth of the daily newspapers in the US.

Swedish Youtuber Followed by 1 Million
Therese Lindgren became the first Swedish Youtuber, who produces content in Swedish, to pass 1 million followers. Therese has produced content on the platform since 2013.

Aftonbladet Morgon Leaves TV3
After three years, Aftonbladet´s morning show will no longer be aired on TV3. This is a consequence of the decision to change the current concept, in order to appeal more to mobile users.