Award season is in full swing and this week we turn our focus to the music scene. In the US, the industry is preparing to celebrate the 62nd Grammy Awards and Alicia Keys is returning to host “the biggest night in music” this Sunday. American singer and songwriter Lizzo with eight nominations is in top, followed by Lil Nas X and Billie Eilish who are up for six honours each. The Nordic music industry is also celebrating. Last Saturday, the annual P3 Guld awards ceremony was held in Gothenburg. Molly Sandén was the clear winner of the night, scoring both “Pop of the year” and “Guldmicken”.

Today, most consumption of music takes place online and especially music streaming services are popular in the Nordics – household penetration ranges from 44% to 60%. The highest figure is noted in Norway where approx. 1.3 million households subscribe to a music streaming service. Comparing specific services, Spotify is the clear market leader in all countries. The service tallies a total of approx. 4.7 million subscribing Nordic households, the highest penetration being found in Sweden (54%). 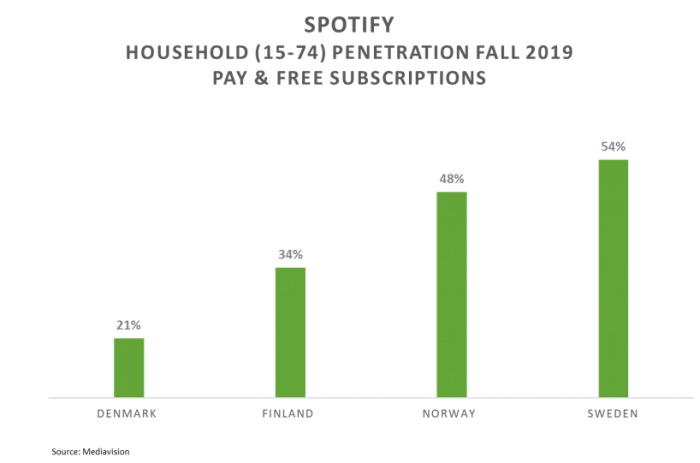 Spotify´s lowest household penetration is found in Denmark. While still being the market leader, Spotify is challenged by local operator Yousee´s own music streaming service that attains a household penetration of 14%. This competitive situation is unique for the Danish market. On the other Nordic markets, the second most popular services merely attain household penetrations ranging between 4-6%. Yousee’s strong position on the Danish market is a consequence of both reach and pricing. Yousee is the largest pay TV, broadband and mobile operator in Denmark. Yousee Music is included as an optional benefit for all Yousee More subscribers and free of charge for all new mobile phone subscribers.

Instagram Drops IGTV Button
Aiming to simplify its platform and following a lack of clicks, Instagram has decided to remove the IGTV-button from the home screen. Users primarily access content on IGTV through other channels in the app, including previews in the feed, the Explore tab, or the standalone app.

Penguin to Launch Streaming Service?
Last week, Penguin Random House announced that it will no longer cooperate with streaming services. Following the removal of thousands of its titles from services such as Storytel, Mofibo and Bookbeat, there are speculations of PRH launching its own service.

Netflix Increases Commitment to France
A new Netflix headquarter has been opened in Paris. This is the company´s fourth European office and it is set up alongside an increased investment in French content, nearly doubling the output to date.

TV 2 Largest Winner at TVprisen 2020
The Danish TV industry celebrated the best achievements of 2019 Saturday. TV 2 was this year´s big winner, scoring 13 awards including heavy hitters such as best news, sports and entertainment. This year´s special prize was awarded to Annette Rømer.

Disney Abandons ‘Fox’ Brand for Movies
Following Disney´s $71 billion acquisition of Fox last year, the company has decided to exclude the Fox brand name from the film studios included in the merger. Hence, their studios will now be named 20th Century Studios and Searchlight Pictures.

Parasite Makes History at SAG Awards
On Sunday, Parasite scored the award for best motion picture at the SAG awards in Los Angeles. Netflix’s The Crown was chosen for best TV drama and Amazon’s The Marvelous Mrs. Maisel was awarded best TV comedy in a successful night for the streaming services.

And then we danced Best Movie at Guldbaggen
Levan Akin´s movie depicting his childhood, And then we danced, scored four awards at the Guldbaggen awards on Monday. Further, Aniara had a successful night, being awarded four prices including best director and best female lead role.

Disney+ Moves up EMEA Launch Date
The European launch date for Disney+ has been moved forward to March 24th. The service will at this date be available in the UK, Ireland, France, Germany, Italy, Spain, Austria, and Switzerland. Launch in additional markets, including the Nordics, will follow in summer 2020.

Netflix in Lead of Oscar Nominations
For the first time ever, Netflix has earned more Oscar nominations than any major studio or specialty distributor. In total, the company received 24 nominations – including two of the spots in the category for best picture for The Irishman and Marriage Story.