The podcast industry continues to attract attention from consumers as well as actors in the Nordics. Especially Spotify has expressed an explicit ambition to take lead in this industry. Its Q4 earnings report focused heavily on podcasts.

Spotify´s Q4 19 earnings report revealed that revenues increased by 24% YOY to a total of 1.86 bn EUR for the quarter. The surge in revenue stems mainly from an increase in premium subscriptions, up 29% YOY. Total premium subscriptions now tally 124 million globally. However, operating loss amounted to 77 million euro, approx. 40 million more than analyst´s expectations. Spotify identified increased costs due to investments, especially within podcasts and tech, as the main reason, while declaring that “2020 will be a year of continued investments”.

Investments in the podcast industry have been the clear focus for Spotify during 2019, primarily proven by the acquisitions of American podcast companies Gimlet Media and Anchor. During the earnings call, Spotify´s next acquisition was revealed – American sports and entertainment media company The Ringer, carrying more than 30 highly popular podcasts in its network. Reportedly, Spotify paid 250 million USD to aquire the company. Consumption of podcasts on their service increased 200% YOY in Q4 19, according to Spotify. The company claims that 16% of its global MAU:s (monthly active users) engage with podcast content on the platform. 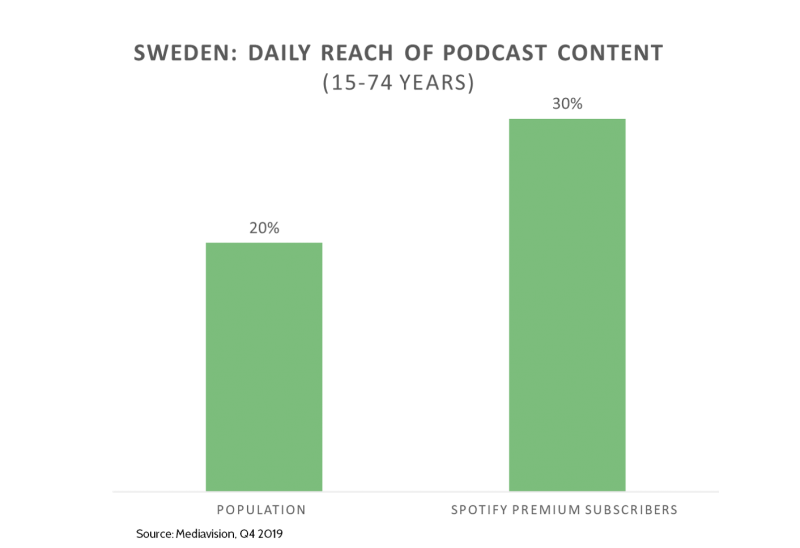 In Sweden, the appetite for podcast content is significantly higher among Spotify subscribers compared to the overall population. According to Mediavision’s Q4 analysis of the Swedish audio market, almost 20% of all Swedes aged 15 to 74 listened to podcasts an average day compared to 30% among Spotify subscribers. Out of these podcast listeners, approximately two thirds used Spotify to access the content. Given Spotify’s dominating position in music streaming across the Nordics, the service has the potential to help drive further growth in podcast consumption during 2020 and beyond.

However, the overall podcast market has yet to take off in terms of monetary ROI. The Swedish ad market for podcasts still lies comparatively dormant (vs eg Radio) despite the vast bulk of podcast content being ad-supported. Furthermore, only 4% (approximately 150 000 households) of the Swedish households state having paid for podcasts during an average month of Q4 2019. Will Spotify’s push into the area help the overall Nordic market for podcasts, or will it mainly drive subscriptions to its (predominantly) music focused streaming service? Mediavision follows the developments closely as we venture into 2020.

NENT Extends Bundesliga Rights
Last week, NENT Group announced the extension of their Premier League rights deal until 2028. The company now continues their investments towards European football by securing the pan-Nordic rights for German Bundesliga until 2025.

ViacomCBS to Expand Streaming Service
Following the merger, ViacomCBS is preparing to expand the offering of their streaming service to include Pluto TV, Nickelodeon, BET, MTV, Comedy Central and Paramount Pictures. The service is assumed to offer both an AVOD and a premium version.

Beiber Most-Watched Premiere on YouTube
YouTube revealed that their documentary series centring around Justin Beiber, has gained the title of most-watched premiere in its first week. The series was produced in line with YouTube´s renewed focus on original content and will be available outside of paywalls.

Parasite Makes History
South Korean thriller Parasite has dominated the awards season, finishing off with making history as both the first South Korean film to win an Oscar, and the first foreign-language film to score the prestigious award of Best Picture.

MTG Doubles Profit
E-sports and gaming group MTG doubled its operating profit during the fourth quarter of 2019. Sales increased by 15% on an annual basis. The company has transformed drastically during 2019, with a change of ownership and the loss of their TV-operations (now NENT).

Oscar Ratings at All-time Low
This year´s broadcast of the Oscars drew a record-small audience. Approximately 23.6 million viewers saw the broadcast, representing a decrease of 20% YOY and down 46% from peak of viewing in 2014.

TV4 and Bauer Team up on News
Following the termination of a five-year cooperation with Aftonbladet, Bauer has found their new supplier of news in TV4. Hence, TV4 will produce and deliver newscasts daily in Mix Megapol and NRJ, amongst others.

Streaming One-Fifth of Total US TV-watching
According to Nielsen, only 19% of TV-watching is spent on streaming among homes that are capable of OTT-streaming during Q4 2019. Netflix accounted for a 31% share of the time, compared to YouTube at 21% and Hulu at 12%.

Swedish SVoD uptake slows in 2019 as market matures, but stacking rises
Over half of Swedish homes (54%) subscribed to at least one video streaming service in 2019, according to consultancy Mediavision.

Swedish streaming market begins to saturate
Research from Nordic analyst Mediavision has found that while 54% of all households in Sweden at the end of 2019 subscribed to at least one online video streaming service, annual growth was sluggish to the point of suggesting that the market may be maturing.