Reports on declining profits and receding subscriber numbers in the newspaper industry have been recurring the last couple of years. As print ad sales decline, subscription revenues – particularly digital – play an increasingly important role. How well have the Nordic newspaper industries fared in the current shift from print to digital?

The newspaper industry has experienced a rough patch the last two decades with digital media cannibalizing print sales, and global giants such as Google and Facebook competing for ad sales. The Nordic market is no exception, judging by the Q4 2019 company reports. In Sweden and Norway for example, Schibsted reported a 35% EBITDA decline YOY for their News Media segment – due to decreasing advertising revenues.

A response to the increasing pressure has been consolidation: In Finland, media conglomerate Sanoma recently announced its purchase of 15 newspapers from Alma Media. In Sweden, Hall Media is reportedly in the process of being sold to a Norwegian bidder. These are among the latest instalments of the ongoing consolidation trend in the media market, driven by changing consumer behaviour and increasing competition.

Attracting the digital reader is more important than ever in the daily news business – both in terms of subscriptions and ad revenues. Media expenditure on text in Sweden, however, indicates that the shift from print to digital is far from complete. 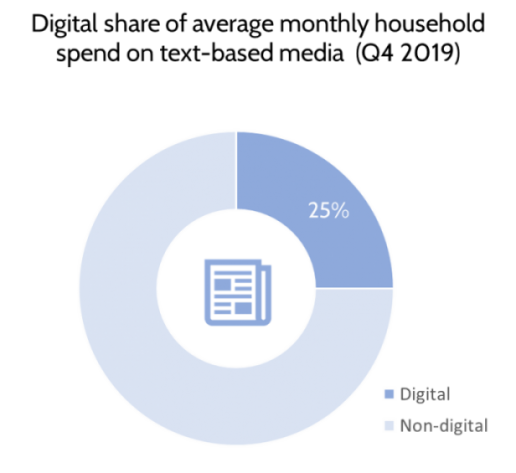 However, American media power houses may lead the way forward. For example, The New York Times and Wall Street Journal are well on their way in the journey towards digital subscriptions. NYT hit a milestone in Q4 2019 where digital subscription revenue outweighed that of digital advertising, for the first time ever. Meanwhile, WSJ reported having passed 2 million digital subscribers.

The question remains whether the Nordic market will see the same development, allowing actors to enjoy this surge in revenue related to digital subscriptions? Mediavision can now provide a full year (2019) report of media revenues and expenditure including text-based media.

Spotify Comments on Manipulated Streams
Lately, the debate on manipulated streams on music services has been intense. Now, the Nordic CEO of Spotify Jenny Hermansson declares that only 1% of their global streams are subject to manipulation, although not including unrecorded manipulations.

NENT Group and Disney Extend Relationship
In a multi-year deal, the content relationship between NENT and Disney has been extended. The deal includes Nordic streaming-premiers of 20th Century Studio Movies, new ABC series on Viaplay and continued access to Disney channels for Viasat subscribers.

British Government to Scrap License Fee
Reportedly, the British government is planning to abandon the public license fee and replace it with a subscription model. Additionally, the plans involve cutting BBC´s number of TV- and radio stations and scaling back the website.

Bookbeat Scales up in Denmark
Bonnier´s streaming audiobook service has been available on the Danish market for a few months. Now, the company is scaling up their presence in the market by entering agreements with several publishers aiming to provide over 50 000 titles.

Zuckerberg Met with Regulators in EU
On Monday, Marc Zuckerberg met with politicians in the EU, discussing how to best control content on social media such as Facebook. Ahead of the meeting, Facebook pointed out the potential need for a new regulator to control hateful content and misinformation.

Subscription stacking the norm in Sweden as SVOD saturation sets in
The streaming market is reaching a saturation point in Sweden, but a new wave of players could reignite interest, claims a new report.

Swedish streaming market might be close to saturation
While 54% of all households in Sweden at the end of 2019 subscribed to at least one online video streaming service, annual growth was sluggish to the point of suggesting that the market may be maturing, according to Mediavision.