There is a Chinese proverb saying “may you live in interesting times”. This has certainly been the case for 2020. Unsurprisingly, this has also led to an increased interest in news. This week we take a closer look at how the digital newspapers are affected by the changes in consumer behaviour. Mediavision recognizes a clear push of digital newspapers but also that willingness to pay for news in increasing.

Digital newspaper subscriptions (i e without a print copy) have grown quickly in 2020, reflecting both an eventful year and a general push from the industry. Households’ willingness to pay for digital newspapers is also increasing. Mediavision will soon present a Nordic analysis of household spend on media and today we share some Swedish findings. 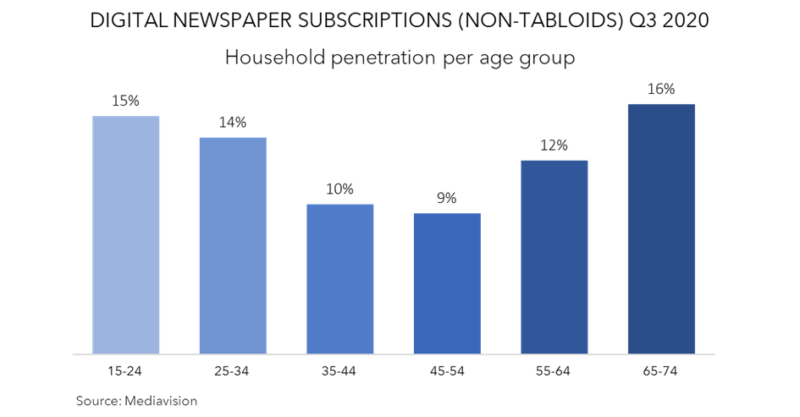 Both uptake and spend is increasing. 13% of the Swedish households now subscribe to a digital newspaper. Older households are more likely to sign up for a subscription and the oldest segment (here 65-74-year-olds) attains the highest penetration (16%). This clearly differentiates digital newspapers from other media categories, normally biased towards younger demos. Most likely, this reflects the higher news interest among the older. The curve is clearly U-formed, with the youngest and oldest showing the highest penetration. Close to 90% of the subscriptions are paid for, which is high in comparison, also implying a high willingness to pay.

The transition to digital is estimated to accelerate in the coming 12 months. Mediavision analysis shows a substantially higher churn intention for traditional print than for digital newspapers. Also, purchase intentions are higher for digital. This suggests that digital subscriptions will increase significantly and represent a considerably larger share of the total subscriber base soon. To conclude, digitalization is the name of the game also in the newspaper industry.

On Tuesday evening, TV4 Media and Com Hem agreed on what the parties refer to as a framework for a new deal. This entails that consumers of Com Hem will be able to watch the TV4-channels during the course of the continued negotiations for a final deal.

Discovery to Move Licences to Germany

Following Brexit, Discovery will transfer its Nordic TV-licenses from the UK to Germany in 2021. NENT on the other hand will adhere to the Swedish constitution, and as such is not able to broadcast commercials for alcohol.

Approximately 600 European directors and filmmakers have made a joint statement urging streaming services to invest at least 25% of profits from Europe into European film production, of which 80% must go to independent production companies.

Reportedly, Disney+ is preparing for a launch in Slovakia and the Czech Republic in the second half of 2021. Further, Disney content on competing service HBO Go will be removed by the end of March 2021.

On December 3rd, NENT Group and Finnish Elisa will launch a combined streaming service in Finland. The service will be priced at EUR 12,99 per month and include all content currently available via Viaplay’s Finnish ‘Films & Series’ package and Elisa’s streaming service Elisa Viihde Aitio.

For its fiscal 2020 ended on September 26, Apple has announced record fourth quarter revenue of $64.7 billion – led by all-time high records for Mac and services according to Tim Cook. International sales accounted for 59% of the quarter’s revenue.

AMCTheatres are looking to raise cash in order to handle debt refinancing and repayments, following severe economic damage caused by the Covid-19 pandemic. AMC are looking to sell up to 20 million class A shares.

NBCUniversal’s hybrid streaming service Peacock has attracted 22 million sign-ups, albeit not disclosing how many of those are free of charge. Regardless, CEO Brian Roberts stated that the service had exceeded all internal engagement metrics.