Newsletter 26th of May: Who Benefits When Audio Market Leaders Join Forces?

Last week Storytel and Spotify announced that they will enter a partnership, making audiobooks available to Storytel subscribers via Spotify’s Open Access Platform. This is all good news for consumers that subscribe to both services, as they will now get easier access. But who is the real winner in this deal when it comes to the actors – the content or platform provider?

The Swedish audiobook market, on the other hand, has grown substantially during the same period, i.e. since Q1 2019. But this market is now also showing signs of maturity. Penetration is almost 20% and growth has gone from double to single digit over the past year. Storytel is the leading actor, but on a significantly smaller segment of the audio market which, in this case, makes its position weaker than Spotify’s. Competition is fierce and there are other upcoming services like Nextory and Bookbeat.

Both Spotify and Storytel find themselves “trapped” on a maturing market, but with different challenges. Growth will need to be generated from other areas, which can be either new markets (as Storytel gaining access to new potential customers via Spotify) or new content offerings to fight churn (as Spotify gaining access to Storytel’s library). In that sense both actors appear to gain from the partnership. But is it really a win-win-situation in the long run? 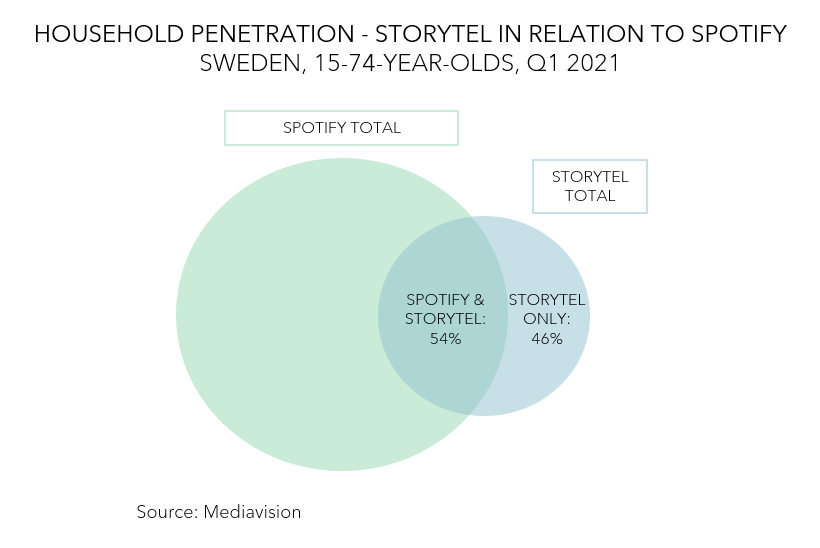 To begin with, Mediavision analysis points at Spotify being almost five times the size of Storytel in subscribing households – and that is only on the Swedish market. In stock market value, the factor is 25 (Storytel is valued at approx. 15 bn SEK and Spotify at 45 bn USD). Spotify holds a dominant position on the audio market and craves content to feed consumers and increase stickiness. This is where Storytel comes into the picture. The question for Storytel is what the long-term value of this partnership is. It will gain access to new potential customers at the risk of making Spotify even stronger in building customer relations. E.g who would the consumer turn to if they had to choose between Spotify and Storytel? Well, the figures give us some guidance: in Sweden, more than 50% of Storytel’s customer base overlap with Spotify. In addition, share-of-listening is 10 times higher for Spotify than for Storytel. When the partnership was announced Storytel’s stock price jumped +20% in just one day. The Spotify stock price barely moved. The market seems to think that Storytel is to gain the most from this partnership. Time will tell.

Netflix to Enter the World of Gaming?

According to a source ‘close to the matter’, Netflix is looking to hire an executive to oversee its expansion into videogames. Netflix has earlier experimented with interactive programming with movies and created games based on shows.

The UK’s Competitions and Markets Authority (CMA) has formally approved the proposed merger of Telefónica’s O2 and Liberty Global’s Virgin Media. The merger was first announced in May 2020 and is expected to close on June 1st.

TikTok, SiriusXM and Pandora have joined forces to launch TikTok Radio, a full-time SiriusXM music channel due to launch online this summer. The station will be presented by TikTok creators, tastemakers, and DJs.

This week saw yet another mega merger announced in the world of TV and streaming. In a multi-billion deal, AT&T will combine its WarnerMedia with Discovery.