Newsletter 25th of August: HBO Max – the Perfect Match to the Nordic Discovery?

The global SVOD market is undergoing heavy market consolidation – with strong impact also in the Nordics. HBO Nordic is one of the services in the very centre of attention with both the launch of HBO Max in 2022, and the upcoming merger of Warner and Discovery.

HBO Nordic launched as a Nordic SVOD service in late 2012, with HBO content specifically selected to appeal to Nordic consumers. Following initial challenges with e.g. technical issues, HBO Nordic proved to be a success and grew fast. With mega hits like Game of Thrones, True Detective and Westworld HBO Nordic has become a strong brand name and is one of the major players in this region. However, growth has slowed down significantly and since autumn 2020, development has been weak with negative customer growth in the Nordics (as per a YOY comparison). 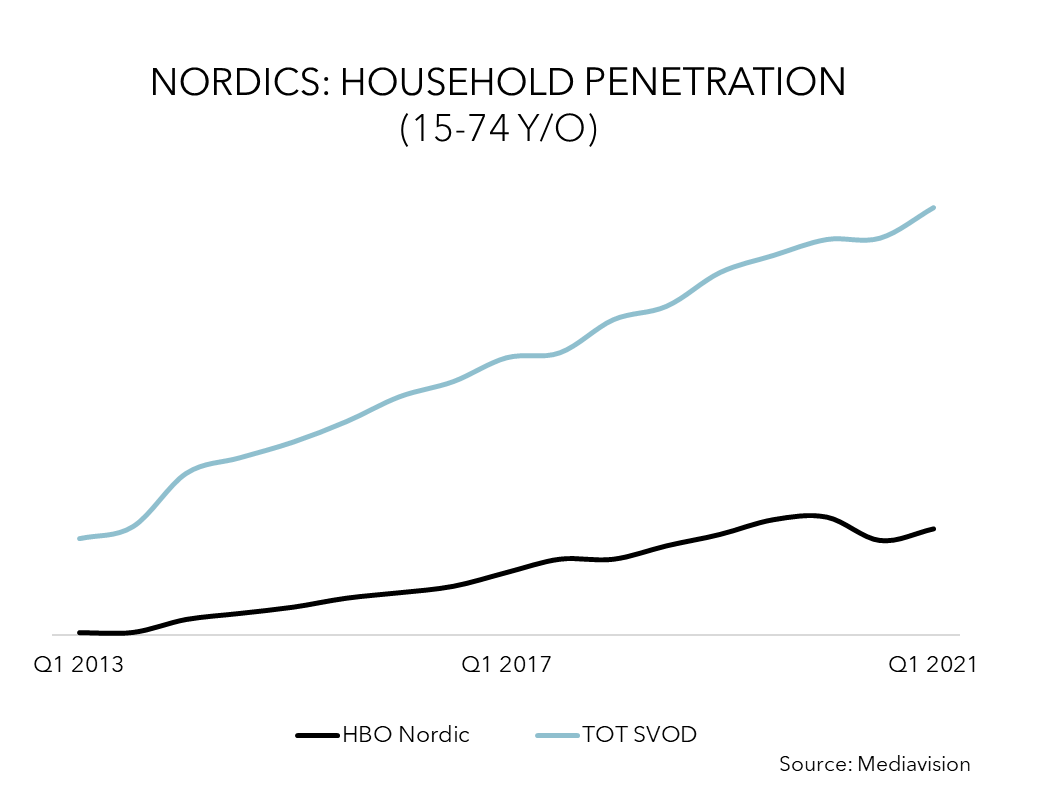 In May this year, news broke that HBO’s owner AT&T were to merge its WarnerMedia division with Discovery Inc in a deal worth 150 billion USD. The aim is to form a standalone, global entertainment company. As Mediavision has commented earlier, combining the HBO Nordic and Discovery+ services looks like a successful strategic move also in this part of the world. The two services would obtain a substantially bigger market share together, since there is only limited overlap in consumer uptake today. It would not outperform the two leading actors, Netflix and Viaplay, in number of subscribers but based on today’s market it would strengthen the position vis-à-vis most others (such as Disney+ and several other local Nordic players).

Further, looking at content supply, Mediavision can conclude that that the two services combined would make a significantly stronger customer offering, based on Nordic consumer preferences.

However, several pieces to this puzzle are yet to be determined. We will keep a close look at how the introduction of HBO Max impacts HBO Nordic’s position in the Nordics – and keep you updated.

Spotify Opens Podcast Subscriptions in the US

Spotify is opening access to Podcast Subscriptions to all podcast creators in the US following a trial for a smaller number of creators in April. Spotify says that access will be expanded internationally soon.

The highly popular format “Masked Singer” will premiere in Denmark this November at TV 2. The format already exists in Finland (MTV), Norway (NRK) and Sweden (TV4).

Spotify Ad Studio, which has been available in a beta-version in Finland, will now be fully launched in the Nordic countries. Ad Studio is a self-service platform built for brands to tailor audio ads to reach their target audiences.

This weekend, ViacomCBS’s released “Paw Patrol: The Movie” in theatres and on Paramount+ – backed by an “eight figure” marketing blitz including 1,800 TV ads and partnerships with close to 200 companies, e.g., for products which will come with a free trial of Paramount+.

In the line-up of TV4’s content this autumn, Solsidan makes a return for the seventh season. The series premieres on October 17th.

Danish TV 2 has extended the current rights agreement for Serie A with three more seasons, meaning that Danish viewers may access the games on TV 2 Play and TV 2 Sport X until the summer of 2024.

The Acast-founders Måns Ulvestam and Karl Rosander’s new company Sesamy offers e- and audiobooks at a one-time cost. Now, the service will expand to include individual news items and articles.