Perhaps surprising to some, as many as 80% of Swedish households have at least one digital media subscription, with Spotify and Netflix in market leading positions. But this week, as our quarterly analysis TV Insight is published, we‘re also focusing on Facebook in Sweden, since the Q3 report last week pointed at a somewhat decreasing usage in Europe.

Throughout the streaming-heavy Nordic region, consumers’ appetite for digital subscription services is growing rapidly. Out of the three main media types – audio, video & text – audio is the single most common form of digital subscription among the Swedish households. 61% subscribe to a digital audio service – and not surprisingly, Spotify is instrumental in this. But, audio book services such as Storytel and Bookbeat also contribute. Looking at number of subscribing households, audio actually has a slight edge over video during Q3.

Another interesting finding is that the market for text is more fragmented than both audio and video (with clear market leaders in Spotify and Netflix), furthermore digital text services attain a lower share of paying subscribers. On the other hand, text is not under the same kind of tough global pressure – as opposed to audio and video services the market is not dominated by a single global giant, local services are the main actors. Looking at digital subscriptions, a strong position is held by Schibsted and specifically Aftonbladet with its Aftonbladet Plus service. 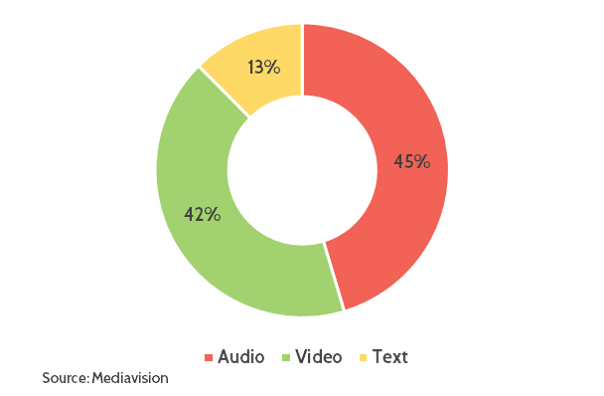 Competition on the Nordic music streaming market will likely intensify going forward as new challengers are entering the fray. Youtube Music has already launched (in July), and Apple Music is catching up quickly on the US market. The same goes for video streaming as both Apple and Disney are gearing up to launch their services here.

A wider range of services also fuels the market, hence the overall growth of digital pay services as well as household spend. Consequently, Mediavision closely monitors subscriptions and ARPU (average revenue per user) levels, per service and aggregated per media type which we suspect will increase over time. Don’t hesitate to contact us if you would like to know more. Mediavision will shortly publish a stand-alone analysis on the subject.

Facebook daily users decreasing & FAANG stock market development
Facebook recently published its Q3 earnings report. The social media giant reported better-than-expected profit but saw its revenue and user numbers fall short of analysts’ expectations. Furthermore, daily active users in Europe decreased for the second consecutive quarter, down to 278 million from 279 million in Q2. Mediavision has seen a similar development in the Nordics. Online video viewing through Facebook shows no increase in reach in Sweden Q3 compared to Q2. Instead, there is an indicated drop in daily reach of -6% QOQ.

Since Facebook’s share price was at an all-time-high in July, its market cap has decreased by roughly $200 billion. Looking at the other FAANG companies Netflix has had a rough quarter as well. Netflix share price is down 13% during Q3 despite beating its earnings per share in Q2. Investors have raised concerns about the streaming giant burning through cash to earn subscribers at an unsustainable rate, suggesting that the stock is overvalued.

EU digital tax runs into opposition
EU countries are studying proposals to levy a 3% tax on big internet firms such as Google and Facebook, but Ireland, Sweden and Denmark made their criticism public on Tuesday. The idea must be agreed unanimously by all 28 member states.

Ragnarok is the title of Netflix first Norwegian drama series which is funded in its entirety by the streaming giant. The six-part series which is based on Nordic mythology starts shooting in Norway and Denmark next year.

Canal Digital launches Netflix service
Canal Digital is to offer Netflix to customers of its OnePlace platform. The android-based platform was launched in March. Netflix will be added to the service alongside Google-originated content.

Spotify to buy back $1B in stock
Spotify has announced a plan to repurchase up to $1 billion worth of shares. The stock-repurchase program will commence in Q4 and expire on April 21, 2021. Spotify has lost nearly $10 billion of its market value since peaking in July.

Svenska Spel talks tough ahead of Sweden’s market liberalization
Sweden’s state-run betting monopoly reported falling revenue and profits in Q3 but expressed confidence in its ability to compete with new international competition in 2019. This week, […].