Nordic consumers show an unwavering appetite for paid streaming services (SVOD), as shown in Mediavisions bi-quarterly analysis of the Nordic video market that is published this week. Netflix has recently inked a deal with Danish operator YouSee and keeps adding subscribers at a rapid pace. Let’s take a closer look.

TDC-owned operator YouSee and Netflix recently signed a collaboration deal which will see Netflix embedded into YouSee’s digital TV service. This marks the first deal of its kind in the Nordics. However, Netflix has a similar deal in place with Sky in the UK. Bundling on-demand services with a traditional TV package acts as an incentive for consumers to retain their traditional TV package. On the other hand, it gives Netflix access to new customers. It remains to be seen what effect this will have in the Nordics, and whether more actors will sign similar deals. According to a press release, YouSee currently has 200.000 customers eligible for the Netflix offering. 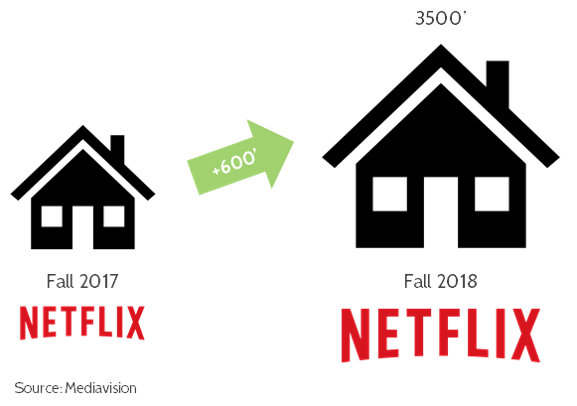 In the analysis of the Nordic video market fall 2018, Mediavision has found that the segment of households with both a traditional pay TV- and SVOD subscription is growing fast. Following the collaboration with YouSee we might see more actors across the Nordics signing similar deals, fueling growth moving forward.

Strive to launch linear TV channel
IMG’s sport streaming service Strive has announced in a press release that it is recruiting Nordic casters as well as launching on new platforms. Strive will launch as a linear TV channel as well as an app for Apple TV.

Tencent Music’s IPO
Tencent Music Entertainment’s IPO is the largest listing in the US since Alibaba’s in 2014. Tencent Music priced its IPO at the low end of expectations at 13 USD a piece. The share sale gave the company a market value of 21.3 billion USD.