On Jan 1st, 2019 the re-regulation of the Swedish gambling market was set in place. Since then, a good number of foreign gambling actors have gotten a Swedish license. According to Spelinspektionen, Sweden’s governing gambling body, 69 companies so far (as of February 26th) have acquired a Swedish license.

During last fall and heading towards the re-regulation, gambling actors upped their ad spend significantly – likely to strengthen their marketing positions ahead of the new legislation. In this, NENT Group and Discovery Networks (under UK legislation) had particularly strong positions, thereby capturing a majority of total delivered gambling TRPs (Target Rating Points) in Sweden. 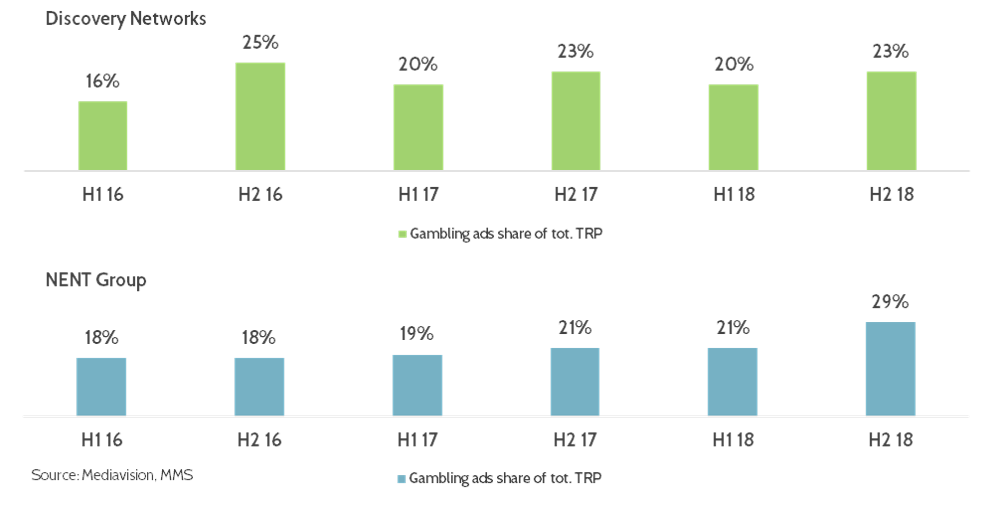 Looking at Bonnier Broadcasting (e g TV4, 7:an, Cmore) for comparison, gambling ads as a share of total TRPs has remained stable at around 5% during the same period (exclusively SE regulated actors).

With the new regulation in place, all licensed gambling actors can advertise in Swedish media. Somewhat unexpectedly, for both the legislator and the different market actors, the ad activity has continued at a very high level and has increased since Jan 1.

Focusing on TV advertising prior to and after the re-regulation, overall gambling ad spend has increased across the board. Interesting to notice is also that Discovery and NENT have actually increased the share of advertising deriving from ‘old’ SE regulated actors. Bonnier Broadcasting, now allowed to take onboard these new advertisers, has doubled its share of gambling TRPs.

Furthermore, the overall total delivered TRPs for NENT Group and Bonnier Broadcasting has decreased by approximately 10% YOY (year-on-year) while Discovery has remained stable.

As gambling advertising has continued to increase, this has become a much-debated subject. Sweden’s minister of public administration Ardalan Shekarabi recently called for a meeting with the gambling actors discussing the situation. Shekarabi calls for change and vows for self-regulation among the actors. To regulate gambling activity, may not be such an easy task as it might require a change of the fundamental law on freedom of expression (“YGL”).

Looking at other European countries, gambling actors in the UK have implemented a self-regulatory solution to ban gambling advertising during live sport events, which is also being discussed in Denmark. Italy has implemented a total ban on all forms of gambling advertising since the beginning of 2019. Where Sweden is heading is still too early to say. But to conclude, we can say that the waves of the debate are already high. To be continued.