Apple joins the SVOD race – Implications in the Nordics?

Last week, Apple announced its entrance on the video streaming market – ramping up competition even further. This certainly begs the question what Apple’s chances are of succeeding on the Nordic market. And how are Apple’s current services stacking up against the competition?

Apple announced its’ video streaming service Apple TV Plus a week ago, alongside the subscription-based services Apple Arcade and Apple News Plus. This increased focus on media services by the hardware giant, is also reflected in Apple’s figures as Iphone sales growth is slowing down while its “Services” segment grows steadily. The latter includes services such as App Store, iTunes, Apple Music and iCloud. In 2018, revenues from the “Services” segment reached 37.2 bn USD, which can be compared to Netflix’ streaming revenues of 15.4 bn. Thus, Apple’s direct-to-consumer media services already has traction on a global scale. In the past three years, Apple’s services segment and Netflix have been growing at a somewhat similar pace (CAGR +15 and +23 percent respectively). It remains to be seen if Apple TV Plus will become a real challenger to the incumbents on the steaming market – and how much of a revenue boost this will provide. Regardless, the entrance of several major players on the global SVOD market this year will likely affect the market leader Netflix.

Zooming in on the Nordics, Apple’s services have yet to gain a significant foothold among consumers. Apple Music and Apple Pay are already available on the market, but both are still small in comparison to its competitors. Looking at the audio streaming segment, Apple Music attained a market share in Sweden of 4 percent during fall 2018. Apple’s hardship on the Swedish market is mainly due to Spotify managing to maintain a market dominating position after it’s first-mover advantage. The pay segment has also proven difficult for Apple to penetrate. According to a survey on e-commerce payments conducted by Dibs, Apple Pay reached 1 percent of Swedish consumers during 2018, as compared to Swish which reached 37 percent of consumers. 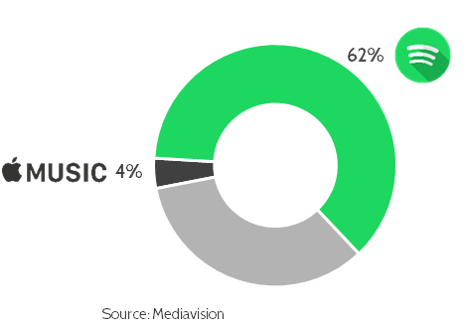 The video streaming market may prove to be different. As Apple’s service will be integrated in the Apple TV application, Apple TV households will be prime targets for the new service. In the Nordics that corresponds to about 1.6 million HHs during 2018. Furthermore, the Apple TV application will act as a storefront for channel bundles including HBO, Showtime and Starz among others. However, on the downside (for Apple), local actors are particularly strong in the Nordics compared to rest of Europe, as discussed in a previous newsletter.

One thing is certain, 2019 is a momentous year on the video streaming market.

Hulu limits advertising breaks to 90 seconds
Hulu is limiting advertising by allowing interruptions to last for a maximum of 90 seconds. This essentially means that Hulu has removed more than half of its commercial time it previously ran in programming on its streaming TV service.

Fox Nation sees high subscriber traction
Fox News’ top executive says 85% of people who sign up for a one-week trial of the Fox Nation streaming service stays on board. The number of subscribers were not disclosed, but the company noted that it has surpassed internal benchmarks.

BBC and Discovery strikes £180m UKTV deal
BBC studios has taken a majority share of UKTV, a service which runs 10 free-to-air and pay-TV channels, in a £180 million deal with Discovery. BBC has used a combination of cash, debt and a content deal to take control of UKTV.

Storytel and Mofibo becomes one in Denmark
In 2016 Storytel acquired Danish audiobook service Mofibo and has since operated as two separate brands on the Danish market. Now the two brands are merging under a single name, going forward the service will be called Mofibo in Denmark.

Netflix scores higher NPS than average SVoD streaming services
Nordic viewers are more satisfied with their streaming subscriptions than with traditional pay TV, but there are significant differences between operators, according to consultancy Mediavision.