The supply of digital media subscription services is larger than ever, more and more also embracing the audiobook and text segments. Mediavision is soon to release total market figures for the Nordics but awaiting those we share a sneak preview. And as the Netflix Q1 figures revealed Tuesday evening: Consumers are still very keen on subscribing to digital media. And of course, this week wouldn’t be complete without the two giant topics: Game of Thrones final season and the Nordic sports market.

Music and video are the frontrunners of the digital media transformation and so far the prime drivers of the subscription market. But the audiobook and text segments are becoming more and more exciting, growing into sizeable markets – in their own right. For Q1 2019, Mediavision can conclude that both show a significant growth. Audiobook and text subscriptions reach 21 and 28 percent of Swedish households (15-74 y/o) respectively. Nordic figures to follow soon. 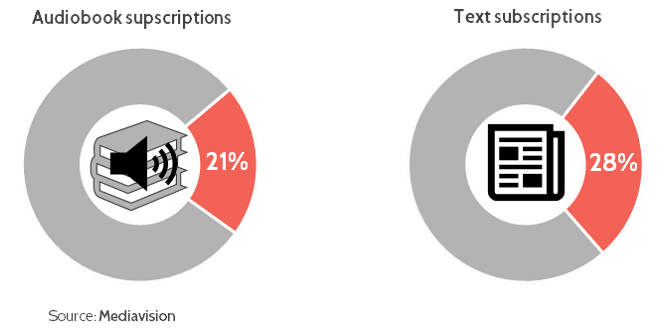 And as always, content plays the most important role in attracting as well as retaining subscribers. Perhaps the most illustrative example is the pivotal effect of Game of Thrones, which premiered its 8th and final season on Sunday April 14 on HBO. The season’s first episode was the most watched one-day event in HBO’s history as the Sunday premiere attracted a crowd of 17.4 million US viewers according to Nielsen.

Another example is of content as a bargaining chip – this one from the publishing side. Last week the publisher Bonnier and audiobook service Storytel failed to reach an agreement regarding content fees. As a result, Bonnier will (for the time being at least) not supply its’ titles to Storytel. Perhaps it is of some relevance that Bonnier also runs its own audiobook service – Bookbeat.

A third example, underlining the massive importance of sports content, is NENT Group’s acquisition of the rights to the major Nordic winter sports (from 2021 and onwards). Earlier this was a true Public Service domain, but times are certainly changing. No doubt, this is further boosting NENT Group’s sports repertoire. NENT’s sports offering already includes two of the three highest rated leagues (Premier League & Champions League) based on viewer interest. And this will surely cause headaches also outside of public service. Mediavision will provide an in-depth analysis of the 2019 premium sports market shortly, read more about our sports analysis here.

We wish all of our readers a very Happy Easter and a wonderful welcome to spring!

AT&T offloads Hulu stake
AT&T has sold its minority stake in Hulu back to the streaming video joint venture for $1.43 billion. AT&T held a 9.5 percent interest. The transaction values Hulu at $15 billion.

Disney unveils release date & price of Disney+
At its Investor Day in Los Angeles Disney revealed more information regarding its video streaming service, aptly named Disney+, which is launching in the US on November 12th. The service will cost $6.99 per month or $69.99 per year.