The appetite for news is huge – digitalization and technology have brought about a totally new market. But for many local news actors this is not without a struggle. As Mediavision releases the third quarter figures for the Swedish media market, consumption of news is in focus this week.

The Swedish news media industry is in the midst of a quite painful transformation, struggling to remain profitable as the print business is in heavy decline. The change puts heavy pressure on local journalism and the governments in both Sweden and Norway have announced increased press subsidies for 2020.

What used to be a highly competitive landscape in Sweden, has changed significantly during the past year. For example, two of the larger media groups have recently been bought by national players, Mittmedia by Bonnier News and Stampen by Norwegian Polaris. Also, this summer, it was announced that the free and ad financed paper Metro, previously with the highest newspaper reach in Sweden, had decided to terminate all journalistic activity. Both advertising and subscription revenues are under strong pressure – in all segments of the market. 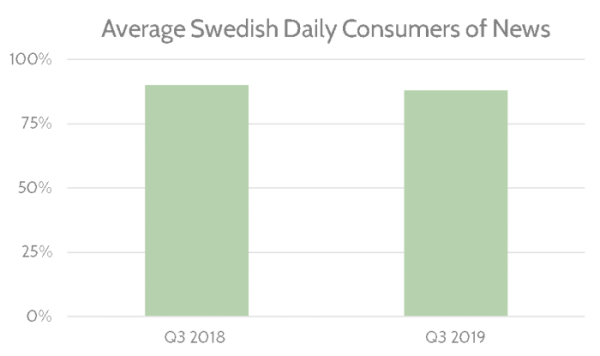 The main shift in behaviour is found in distribution and devices used to consume news. More than half (56 percent) use their mobile phones to access news – making it by far the most commonly used device for news consumption. The use of smart speakers for news is still low in Sweden (less than 2% as a daily average).

Analysing the prominence of specific actors in the industry, Aftonbladet and Facebook have the highest daily reach in news consumption; 44% and 37% in Q3 2019. Despite the large reach Facebook is only found to be the fifth most popular primary source within the audience. Instead, Aftonbladet (18%) and SVT (17%) is most frequently identified as the primary source for news consumption by consumers.

The news media industry continues to innovate and expand their business models to survive in the changing media landscape. Mediavision thoroughly monitors this transition through shifts in consumer behaviour and market developments – in the entire Nordic region.

NRK´s Funding to be Tax-based
The Norwegian state budget for 2020 entails that NRK will be financed by taxes rather than license-fees as it currently is. Additionally, global streaming services might be obligated to invest part of their revenue in Norwegian VOD content.

The Precieved Value of Time Spent Online
Only 25% consider that their time spent on social media provide value, compared to 60% considering time spent on news applications are valuable, according to Internetstiftelsen. The lowest rating concerns mobile games, where the corresponding number is 12%.

TUBI to Launch in Europe Next Year
On Monday, TUBI announced their launch in Europe next year. The service is advertising financed and has been referred to as the “free Netflix.” The launch entails that the battle for the European streaming consumers intensify even more.

Joyn to be Launched Globally
Streaming service Joyn, run by Discovery and German media giant ProSiebenSat.1, will be launched internationally. The AVOD platform currently has approximately 4 million monthly active users in Germany and plans to produce 12 originals next year.

Fortnite Launches Chapter 2
The beginning of this week caused unease for players of the immensely popular battle royale game Fortnite as they were unable to play the game. Instead, only a black hole was displayed, which has now been revealed to be a PR stunt for the launch of Fortnite Chapter 2.