Black Friday has become an important seasonal kick-start for retailers in the US as well in the Nordics. Focus has been set on consumer electronics and hardware, but with increased competition over households and consumers and a maturing digital market, media and subscription services are expected to join the party. Still, the most remarkable sales this year is probably the Swedish ecommerce-store CDON that offers a discounted outer space trip.

In 2018, sales during Black Friday in Sweden amounted to 6.5 billion SEK, representing an increase of 20% YOY. In Norway, the increase YOY was 4% and total sales 3.7 billion NOK1. In 2019, Black Friday sales in Sweden is expected to increase 10-15% (YOY), which would imply 7–7.5 billion SEK in total turnover. Looking at the estimated spend per person, Danes and Swedes are approximately at the same level; close to €200. So far, Black Friday in the Nordics has been an important day for consumer electronics in general and mobile phones, TV´s and video games in particular. These are also the segments where the largest savings can be found.

1 Total sales in Sweden, only sales by credit/debit card in Norway. 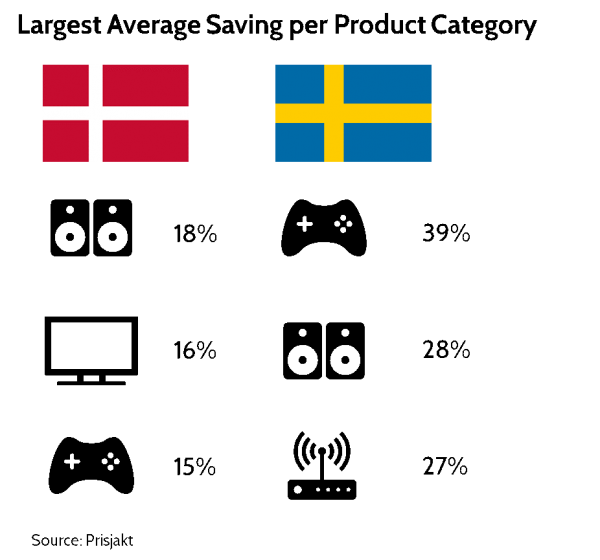 However, there are also some remarkable discounts on streaming, especially in the US. In 2018 Hulu offered annual subscriptions for 99 cents per month, HBO Now discounted their gift cards by 40% and Spotify offered “3 months for 99 cents”. This year, Sky Entertainment in the UK has a 50% deduction on their streaming packages and Amazon in the US does the same with their audiobook service Audible (on 4 months subscriptions). These are only a few examples. In the Nordics, Black Friday media offers seem to be limited to operators, such as Riks TV (Norway), Telia (Nordics) and Tele2 (Sweden). In the coming year, we may see an expansion in this field.

UEFA Considers Streaming
Following concerns that traditional broadcasters are less willing to invest in premium sports content, UEFA has revealed that it is considering retrieving media rights for Champions League from some markets and putting it on UEFA-TV instead.

2,6 billion Expected 5G Subscriptions in 2025
Ericsson estimates that the global number of 5G-subscriptions will increase to 2,6 billion by 2025, mainly spurred by the shift from 4G to 5G in North America. Currently, there are approximately 13 million global subscribers.

Danish Public Service License Lowered
The Danish government has decided to lower the public service license fee to 1353 DKK in 2020. It was the government´s opposition and not support parties that voted to pass the act.