This year´s season of the UEFA Champions League is in full swing as the group stage draws to a close. The broadcasting and streaming rights for the Champions League have traditionally caused bidding wars among media actors as it attracts a vast interest in viewing. UEFA is currently in the middle of a new round of rights auctions for the 2021-2024 cycle, but prices seem to have staggered.

Being one of the most popular sports tournaments worldwide, Champions League also generates a high interest in viewing. Last year, the all-British finale between Liverpool and Tottenham attracted 1 465 000 viewers in Sweden according to Dagens Media – an increase of 136 000 viewers compared to the finale in 2017. In Norway, 685 000 viewers saw the finale on TV2, according to Kampanje. That figure represents an all-time-high for viewing of the final in Norway.

The vast popularity of this tournament also implies that the broadcast and streaming rights are highly attractive. NENT (formerly MTG) has been the rights holder in Sweden, Denmark and Norge since 1992. In Finland, Bonnier/TV4 Media currently holds the rights. 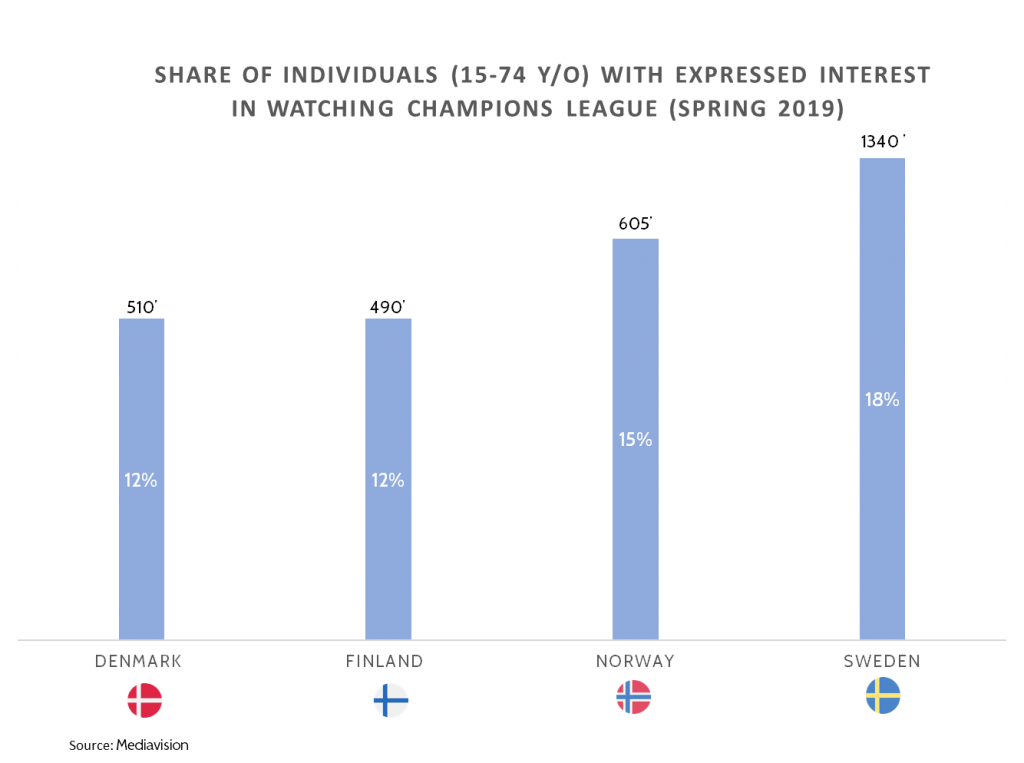 The most lucrative market for the Champions League rights is the UK, where the 2018-2021 media rights contract reached a value of £394 million per season. Last week, it was announced that the current rights holder BT will retain the rights for three additional seasons in a deal worth £1.2 billion. The deal between UEFA and BT includes rights to all 420 games of the UEFA Champions League, UEFA Europa League and the new UEFA Europa Conference League for three seasons, across both BT Sports channels and digital services.

As such, UEFA managed to preserve the value of the Champions League rights in the UK, contrary to Premier League – where revenue from broadcast media rights dropped by 8% this season. Thus, UEFA has expressed concern that traditional broadcasters are no longer willing to invest in premium sports in some markets. Hence, the organization is considering streaming the games directly via its own, recently launched service UEFA TV. This poses the question – have prices of sports media rights reached a ceiling following the continuous increases during the last years?

Maybe not, as follows by evidence from other markets. Last week in France, the rights for Champions League were sold to Canal Plus and beIN Sports for €375 million per season, a substantial increase compared to the €315 million payed by the rights holder in the current cycle.

Google CEO to Head Alphabet
The current CEO of Google, Sundar Pichai, will also be the CEO of parent company Alphabet. Hence, Pichai will replace current CEO and co-founder of Google, Larry Page. In addition, co-founder Sergey Brin will step down from the role of president of Alphabet.

“The Irishman” named Best Movie of the Year
The National Board of Review in the US named Martin Scorsese’s new movie “The Irishman”, which premiered on Netflix last week, “best movie of the year”. Additionally, the script was awarded “best adapted screenplay of the year”.

Tencent Challenges TikTok
Chinese tech conglomerate Tencent is set to invest 22 billion dollars in video-application Kuaishou. The investment equals 20% of ownership in Kuaishou, which is the primary rival of the global success TikTok.

Viewing Record for Christmas Calendar
This year´s Christmas calendar in Sweden sets records for online viewing. The first episode is the most seen program online ever (+3 min), since MMS started to track online viewing in Scandinavia.

First Norwegian Netflix Original Premiere
This week, the first Norwegian original series produced for Netflix is premiering. The series, “Home for Christmas” is produced by The Oslo Company and based on an idea from students at Kristiania University.