Newsletter 29th of January: Are We Entering the Era of Streaming Fatigue?

The streaming market is becoming increasingly crowded and yet, several new services are to be launched. Simultaneously new buzzwords “streaming fatigue” and “subscription fatigue” have gained traction in the US as consumers are overwhelmed with choices for streaming. Has this notion been established in the Nordics as well?

The ever-increasing competition on the streaming market, commonly referred to as the streaming war, has been reported on frequently during the last couple of years. Consumers are overwhelmed with options when choosing a streaming service – and there are still more to come. In the US, it was reported last year that 300 options were available on the market. Already in 2018, 47% of U.S. consumers stated that they were frustrated by the growing number of subscriptions and services required to access their desired content, according to Deloitte. 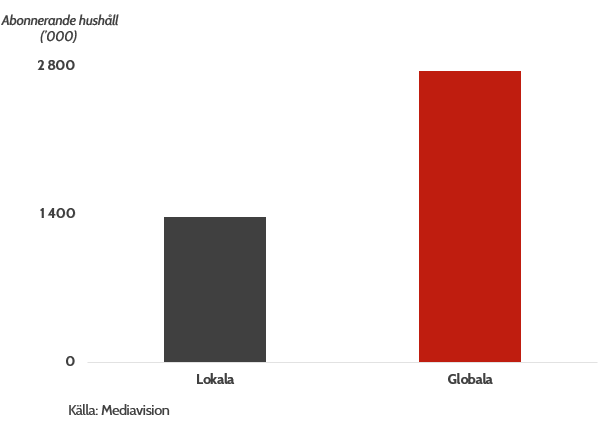 Hence, in recent months reports on the next industry-buzzwords have begun to appear – streaming fatigue and subscription fatigue. NBCUniversal´s Chairman Steve Burke addressed the question of “subscription fatigue” during his presentation of upcoming service Peacock last week, arguing that we may now enter “an era of subscription fatigue” and identifying it as one of the reasons for choosing an AVOD-focus for their service.

Is subscription or streaming fatigue apparent on the Nordic market yet? Mediavision´s quarterly report on the Swedish TV-market found that stacking is actually increasing in Sweden. During the fourth quarter of 2019, the average SVOD household subscribed to 1.8 SVOD services. However, annual growth has stagnated for penetration of SVOD-services (and daily reach of online viewing as well) comparing Q4 19 to Q4 18. Hence, those who already subscribe to a service do not yet hesitate to subscribe to another, but the flow of new customers seem to have stalled. In conclusion, we have not seen any proof of of streaming fatigue on the Swedish market – yet.

Com Hem Reports Telia to EU
On Monday, Com Hem announced that they have reported Telia to the EU-commissions monitoring trustee. According to a press release by Com Hem, the reason being Telia´s movements in the auction of their OTT-rights.

TV 2 Norway Invests in Esports
A deal has been signed between TV 2 Norway and the national e-sports league Telialigaen for four additional seasons. The agreement includes live broadcast of finals twice a year and a weekly event of CS GO, in both linear television and on TV 2’s online video service Sumo.

Netflix Added 8.8 million Subscribers
According to Netflix´s latest earnings report, the service added 8.8 million net subscribers in Q4 of 2019, surpassing their forecasted growth of 7.6 million. The vast bulk of new subscribers came from the international markets, adding a total of 8.33 million subs.

Apple Reports Record Results for Q1
On Tuesday, Apple disclosed the financial results for its fiscal Q1 of 2020. Revenue increased by 9% YOY, resulting in an all-time record for quarterly revenue. Growth is said to be mainly driven by iPhone, Wearables and Services.