Newsletter 11th of March: Quibi – The Latest Innovation in the Battle Over Streaming Subscribers

The battle over consumers and market shares in streaming continues. In April, Quibi will launch in Canada and the US, largely competing with actors such as Youtube, Facebook and Instagram. The idea is to offer high-quality content in a “quick bite” – episodes no longer than 10 minutes.

As viewing of online video increases, devices used to consume content are not limited to computers or smart-TVs. Mediavision’s figures show that content consumed on mobile devices (phones and tablets) add up to as much as 20% of all video viewing in the Nordics. Probably a good starting point – should the new streaming service Quibi choose to enter this part of the world. 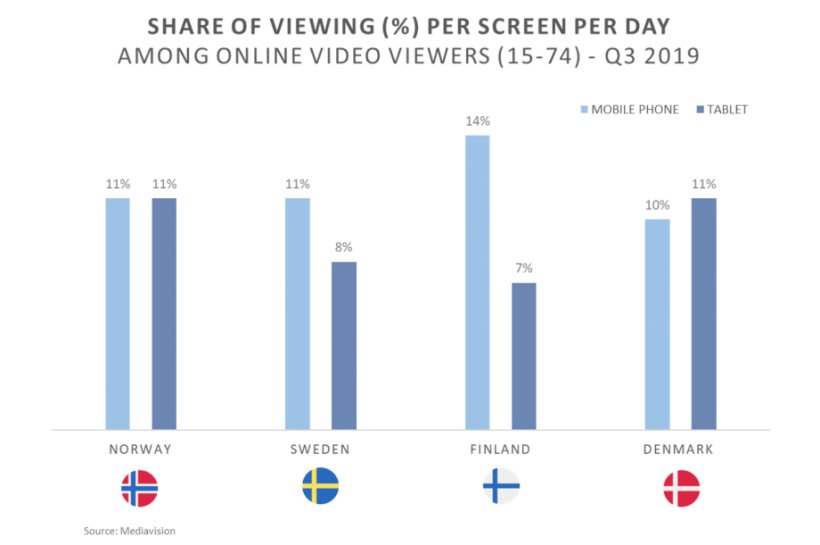 In an increasingly competitive streaming market, innovation and differentiation is crucial. Seemingly, this is what what former Disney and DreamWorks Animation CEO Jeffrey Katzenberg together with ex-eBay and HP-leader Meg Whitman have acknowledged with Quibi. The service, set to launch in the US and Canada on April 6th, will offer high-quality content in “quick bites” – episodes of 10 minutes or less – only available on mobile devices. Quibi’s target audience is young; between 25 and 35 years old and today spending a lot of time on YouTube, Instagram, Snapchat and TikTok.

So far, Quibi has attracted heavy investors including Disney and WarnerMedia, as well as e-commerce company, Alibaba. Total pre-launch funding is estimated to $1.75 billion – funds well needed considering Quibi’s focus on producing high-quality content, launching with a slate of 50 original shows. What is referred to by Quibi as “Lighthouses” videos are assumed to cost roughly $100,000-per-minute to produce (filmed and edited to be viewed both horizontally and vertically). The service will launch with two types of subscriptions; $4.99 a month with ads and $7.99 a month without (and 90 days free trial for those who sign up ahead of launch). Once again, Mediavision recognizes that more services are offering hybrid-models, like Hulu in the US or TV 2 Denmark.

Sadly, The Hollywood Reporter, recently announced that Quibi has cancelled its launch event on April 5th in LA, amid concerns about the corona virus. The company hadn’t announced who would be attending the event but said it would host a “star-studded red-carpet featuring Hollywood’s biggest stars and creators.”

The Swedish trade union for the theater and movies industry, has inked a unique deal with Netflix. The new framework comprises a “unique compensation model” developed to give creators behind popular series created for Netflix in Sweden additional rewards.

All Sports Cancelled in Italy

The Italian government has decided to cancel all sports events in the country until the 3rd of April due to the spread of the coronavirus. Consequently, rights holders in the Nordics; TV 2, IMG, Sanoma and C More, are unable to air the popular Serie A.

Disney has signed another multi-year distribution deal, this time with Spanish telecom company Telefónica. Consequently, Disney+ will launch on Movistar on March 24th, when the service launches in Spain.

Sveriges Mediebyråer states that media investments decreased by 16,3% during Feb 2020 compared to the same period YOY. Partly, the reduction is assumed to be a consequence of the change in regulation regarding gambling advertising last year, triggering large investments.