The media industry serves an important role in our society, especially in a crisis such as the pandemic we are battling right now. Perhaps the most important purpose is to provide the public with correct and valuable information about the current situation. Changes in viewing habits of Swedes these last couple of weeks indicate that public service is the primary source for news in video-form.

When the world holds its breath in a crisis, such as the pandemic we are all battling right now, the importance of the media industry is displayed in multiple ways. For example, actors such as Google, Microsoft and Zoom have fought to keep up with demand of their work-from-home software in the last weeks as millions of people are now working from home. Microsoft saw a total of 44 million daily active users of Microsoft Teams on March 19th, an increase of 12 million users in only seven days (from the 12th of March).

Further, streaming services and other actors provide us with entertainment to ease this period of social distancing. Perhaps with even too much sought-after content, as multiple streaming services were urged by the European Union to reduce the quality of their videos in order to decrease the restrain on the networks across the continent and keep the digital traffic afloat.

But first and foremost, media provide us with invaluable information on the latest developments in the world. Demand for news content in Sweden has surged dramatically in the last three weeks. The combined rating of content within the genre “news broadcasts” has increased by 53% in 3+ and as much as 80% in 15-49, comparing week 12 in 2019 and 2020. 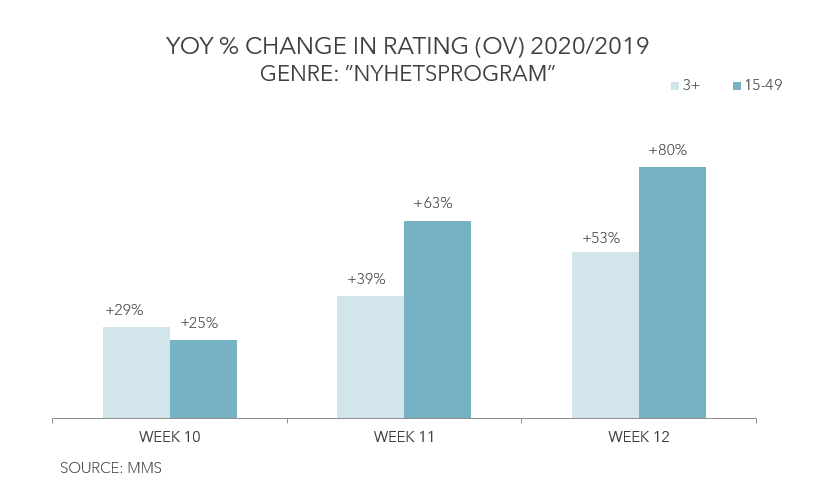 Analysing the rating of the three largest, scheduled news programs in Sweden, figures from MMS indicate that Swedes to a higher degree turn to public service broadcaster SVT as their news source. During the weeks of 10-12, SVT attracted the highest average weekly ratings for their broadcasts of Rapport (19.30) and Aktuellt (21.00) in traditional broadcasting.

Looking at online ratings – TV4’s Nyheterna (22.00) increased its online rating the most counted in percentages during weeks 10-11, but saw a -1% decrease in rating between weeks 11-12. Although in absolute numbers, SVT’s programs attracted larger audiences. 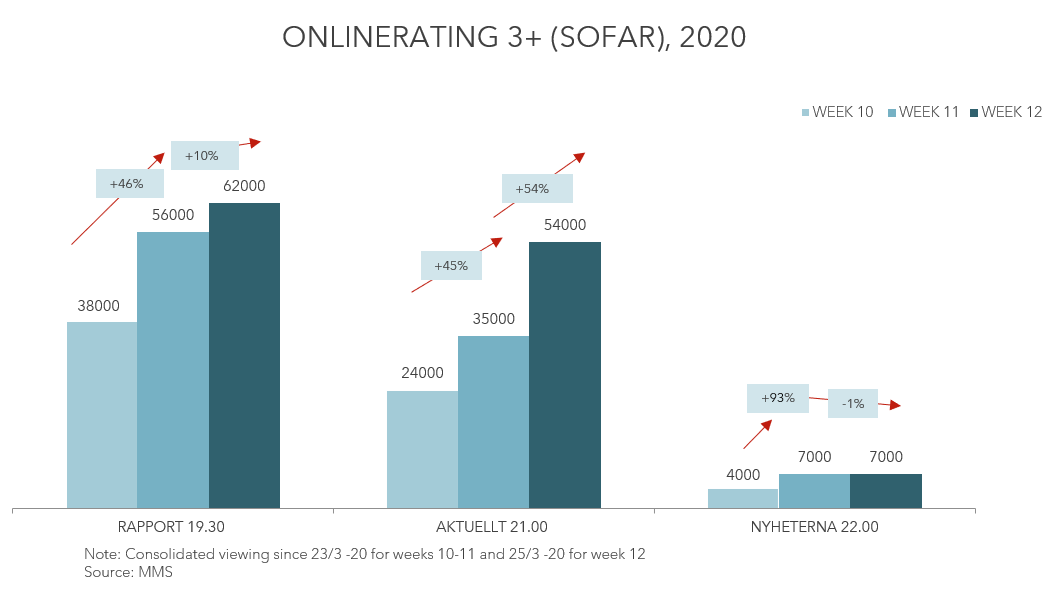 Other actors, mostly providing content in the form of shorter news-clips, also experience increased ratings online due to reporting on the pandemic. Both the daily (evening) papers Expressen and Aftonbladet increased the average online rating of their clips with 40% from week 10 to 11. Given the increased demand and interest for news, other measures are taken in order to attract or ensure satisfied consumers – for example, Tele2 has chosen to provide all digital-TV customers with free access to their global news channels, including BBC World News and CNN.

French pay TV operator Canal+ decided to de-encrypt channels due to the Coronavirus, including its premium sports channel. The decision is now being changed following concerns from the audio-visual industry regarding the rules governing windowing of content in France.

Oprah Winfrey has launched a new series on Apple TV+ focusing on the Corona-pandemic. The series, titled Oprah Talks COVID-19, premiered on Sunday with an interview with actor Idris Elba, who has tested positive for the virus.

On March 24th, Disney+ launched in the UK, Ireland, Spain, Germany, Italy and Switzerland. The service will be available at an introductory price of £49.99 for a year in the UK. France is no longer included in this phase, as originally planned, due to the pandemic.

UK service provider Virgin Media has reached a deal with NBCUniversal granting consumers the opportunity to view NBCU’s new releases on the same day as the planned cinema release, allowing people to view new movies despite the Corona-outbreak restrictions.

DR’s P3 and P4 will increase their share of Danish music by 30%, following a meeting with Danish Minister of Culture Joy Morgensen. Other stations are also urged to play more Danish music as artists loose revenue from cancelled shows due to the pandemic.

Although the number of users increased significantly in Q1 for Twitter, up 23% YOY, the company now warns for loss due to lost advertising revenue on the global market as a consequence of the Corona Outbreak.