The consequences of the Corona outbreak are substantial for almost all actors in the media industry. Very shortly, Mediavision will release the Nordic Q1 analyses and the impact of the pandemic on the media industry and its’ consumers will of course be in focus. Today we want to give a preview by looking at TVOD. Could some of the effects of the crisis actually be beneficial for certain actors? Will TVOD services surge as more movies premiere online?

Last year, global box office revenue set a new record of 42.5 Billion USD according to Comscore. The beginning of 2020 has seen a dramatic downfall in both cinema visits and ticket revenues in the Nordics, as elsewhere. In Sweden, visits decreased by 96% at the end of March (week 13). This past weekend we were reached by the news that AMC – Americas largest movie theater chain – is filing for Chapter 11 (a form of bankruptcy that involves reorganization of business, debts and assets).

In an attempt of damage control, distributors have moved several top tier premieres online, including “Emma” and “The Invisible Man” by Universal and “Ghostbusters” by Sony Pictures. This strategy seems to be paying off, or at least giving the studios a possibility to recoup some of their investments. Last week, Universal decided to skip the theatrical window and make DreamWorks Animation’s “Trolls World Tour” available via premium TVOD-services for $19.99 (48h rental). According to Universal, the picture had the biggest online opening day and opening weekend ever. Several major Nordic premiers are now made available for rental online, including “Catwalk” and “Pelle Svanslös”. 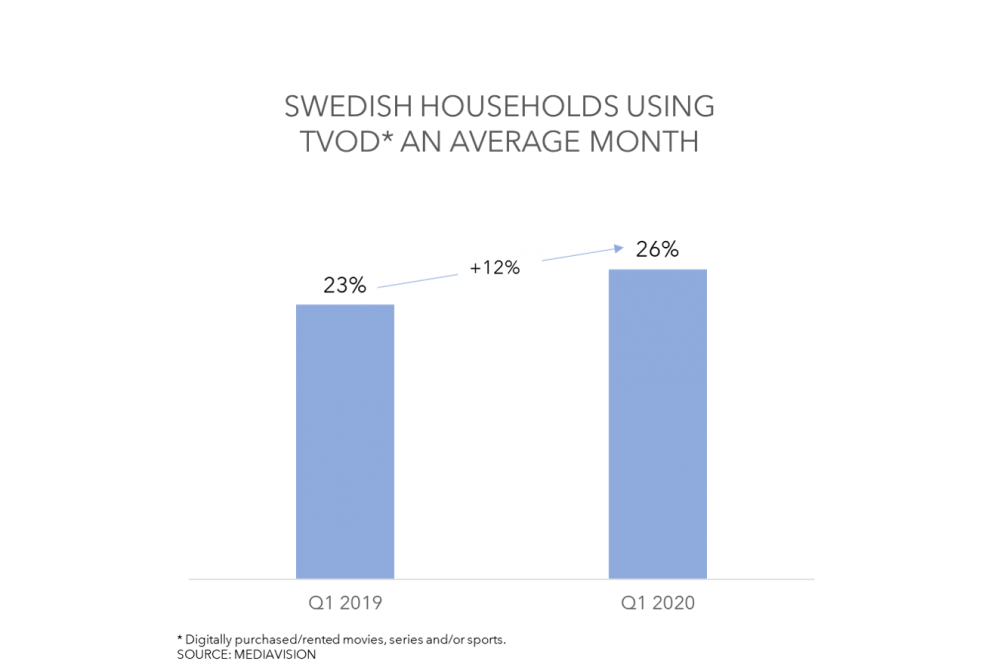 Q1 data 2020 from Mediavision confirms that also Nordic consumers, in this case Swedish, have an increasing interest in TVOD. However, and important to point at, the interest is growing all through the first quarter – not only the last couple of weeks. The number of Swedish households using TVOD to purchase or rent content an average month is increasing by 12% YOY. This may indicate both an underlying trend as well as a short-term shift, caused by a world-wide lock-down. During the spring, we will continue to closely monitor also how the market and its consumers are affected by cancelled or postponed productions.

On Tuesday, Netflix’s stock value increased by +4.7%, setting an all-time high for the company. Analysts state that Netflix is one of very few companies in the S&P 500 to be, to some extent, impervious to the derivative effects of the Corona outbreak.

Continuing their focus on sports rights, NENT has acquired the rights to Champions League in Denmark until the end of the 23/24 season. The rights-owner for the rest of the Nordics is yet to be revealed.

According to CEO Meg Whitman, the Quibi-app was downloaded 1.7 million times in the first week following its launch on April 6th. Whitman stated that the launch had not been negatively affected by the Corona outbreak.

Streaming service Disney+, yet to launch in the Nordics, now holds 50 million paying subscribers. Approx. 8 million of these originate in India, where the service launched 2 weeks ago. Pre-launch, Disney expected the service to hit 60-90 million subs by 2024.

Apple has put a number of original Apple TV+ series outside of the paywall as part of a promotional tactic amid the Corona virus pandemic. April is set to be a busy month for Apple TV+ with the launch of 5 new US titles its first British production “Trying”.

Viasat Channels to be Rebranded

This June, NENT’s pay-TV channels will be rebranded to “V” on all Nordic markets, replacing the existing Viasat-brand. The rebranding includes sports-, movie- and series channels.

Disney’s CEO Bob Iger has postponed his retirement in order to retake control amid implications of the Corona crisis. Reportedly, Disney is losing 30 million USD a day. In the Nordics, Disney lost 12% of its revenues in the latest fiscal year ended September 28th 2019.

The long-term distribution agreement between NENT and Norwegian TV and broadband operator Altibox has been expanded to include Viaplay. Further, Altibox will continue to offer NENT Group’s Viasat pay-TV and FTA TV channels.

On Wednesday, Comcast launched an early preview of the premium tier of Peacock, NBCUniversals upcoming streaming service. Peacock will launch on July 15th with a free tier and a premium tier, available with (4.99 USD/month) or without (9.99 USD/month) advertising.

The Danish government said it it will provide an estimated DKK 180 million in aid to support media affected by the coronavirus crisis, reported Mediavision in a news round-up.

Swedish viewers are turning towards domestic public service broadcasters as their primary source for news in video form during the coronavirus crisis, said consultancy Mediavision.