Mediavision: 2.9 million Pirates in the Nordics

Piracy has been a major challenge in the Nordic region for many years and 2021 is no different. New figures from Mediavision show that even though the supply of legal online video services has increased, piracy is still high.

According to research from Mediavision 14% of all people 15-74 years old in the Nordics have illegally streamed or downloaded films and TV episodes in the past month. This is on average in the Nordics, and the figures vary between the countries. Piracy in Sweden is highest at 17% and lowest in Finland and Denmark, both at 12%. In total this amounts to approximately 2.9 million pirates in the Nordics. Almost half of these pirates are from Sweden. 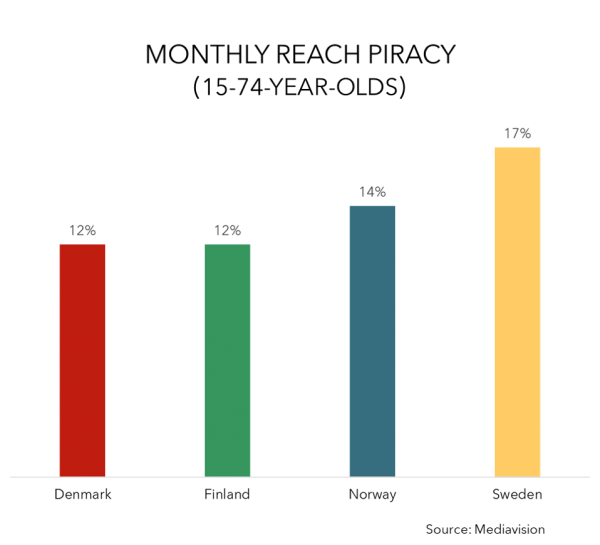 – Streaming has been a big challenge for rightsholders in the Nordics for many years. There are almost 22 000 titles currently available to Nordic consumers via legal online video services. Still, many choose to use illegal sources to access content, says Natalia Borelius, senior analyst at Mediavision. This shows that availability is not the only issue when it comes to piracy. Other measures may be needed if these figures are to be brought down.

Mediavision is an independent analysis and consultancy firm, focused on analysis and
strategy within traditional and digital media. 6,700 respondents between the ages 15 to 74 are surveyed every six months in the Nordics.
For more information, please contact:
Natalia Borelius
E-mail: natalia.borelius@mediavision.se
Tel: 08-52 80 90 90 / +46 73-620 80 52