The peak season for premieres of new and returning TV shows is here. As it looks, this fall the season premieres are attracting roughly the same viewing in linear TV as last year’s season premieres. Hence, not making up for the general decline in overall broadcast viewing.

Traditional TV viewing has decreased substantially all through the Nordics in the past years and the 2019 autumn premiere season is no exception. Looking at trad TV viewing figures in Sweden mid-August to mid-September 2019, total viewing time decreased by 6% with significant drops for three of the four largest broadcasters.

While Bonnier Broadcasting, NENT and public service broadcaster SVT all experienced decreased viewing, Discovery Networks increased slightly; +3% (or +0,5 min/day). The growth is a result of higher viewing in several of Discovery’s channels, both niche channels and the main channel Kanal 5.

This is also the time for autumn premieres and correspondingly the peak season for launches of new shows and season premieres of old favourites, which might boost viewing. 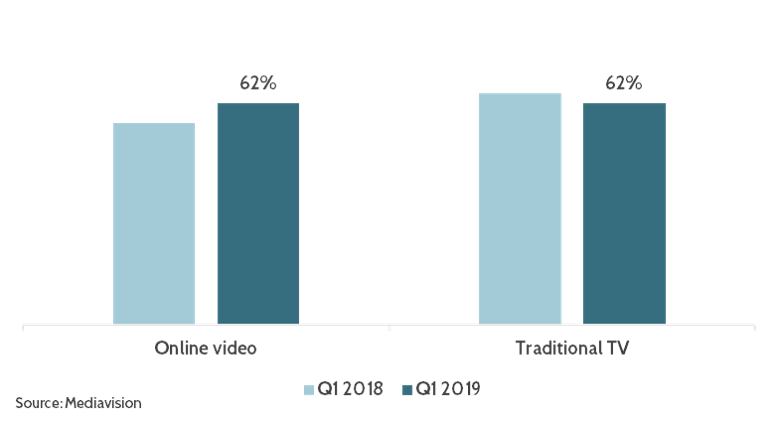 So, let’s focus on the premieres of some of the channels’ most watched series in terms of viewing time. We can conclude that all of the selected premieres perform better compared to last year, except TV4’s entertainment show Idol. However, Idol still maintains a high level in absolute viewing figures just as Fångarna på Fortet with season finale last Friday.

Apart from these returning entertainment shows, several new series have aired; Discovery’s Över Atlanten, which premiered in late August, has had a strong opening, just as TV4’s new drama series Fartblinda. Kristian Luuk, who previously hosted Fråga Lund (which this year is hosted by Robin Paulsson), now has his own talk show Luuk & Hallberg that airs on SVT1 on Saturdays. The NENT Original Den inre cirkeln, that was launched on Viaplay during the spring of 2019, is now broadcasted on TV3 on Mondays.

In short, the Swedish viewers have plenty of content to enjoy this autumn. But even though the broadcasters launch new series and strong titles return, the premieres cannot compensate for the overall viewing drop in traditional TV. Many viewers migrate to watch online instead. Looking at the above-mentioned season premiers in online video instead, all of these, except for Efterlyst, show substantial increases; Fråga Lund with the strongest increase in online viewing (+53% YOY according to MMS).

Evidently, Swedish broadcasters face a problematic situation. Even though some of the loss in traditional viewing can be offset by the increase in online viewing, competition in online is fierce. Especially as the launch of several new international streaming services draws closer, rendering a high interest among the Swedish audience, as reported in our press release last week.

HBO Max Secures Rights to Big Bang Theory
Warner Media has acquired the exclusive rights to stream “The Big Bang Theory” on its new streaming platform HBO Max, launching next spring. All 279 episodes will be available and the deal also includes rights to air the series on cable.

Danish YouSee Restructure Offer
Danish TV-service YouSee is restructuring its customer offering. While collaborations with Danish TV2, Nordisk Film and Cmore are expanded, Discovery Networks TV channels will not be available in YouSee’s fixed packages from 2020.

Disney CEO Resigns from Apple Board
The chairman and CEO of Walt Disney Company, Bob Iger, has resigned from Apple’s board of directors. A conflict of interest between the two companies, resulting from the upcoming launch of their streaming services, is identified as the main reason for the resignation.

J.J. Abrams Signs with Warner Media
Warner Media has signed an agreement with J.J. Abrams and his production company Bad Robot. The deal has been valued to $500 million, although the financial details have not been publicly disclosed. The surge for top talent continues.

NBCU Launches Streaming Service Peacock
NBCU´s new streaming service will include original shows from its own library, such as The Office, following a shift in strategy amongst media conglomerates making original content exclusive in own services as opposed to offering it to 3rd parties such as Netflix.

Dplay Increased Subscriber Base in Denmark
Dplay in Denmark more than doubles its subscriber base during 2019. The reality show “Ex on the Beach” is identified as one of the main drivers, in addition to a deal made with TV-distributor Boxer that give customers free access to Dplay.

Netflix Acquires Rights to Seinfeld
In a deal valued at over $500 million, Netflix has secured the global rights to Seinfeld during a five-year period. The acquisition is a highly competitive move by the service, having lost the rights to hit shows The Office and Friends recently.