The pandemic has affected the media market in various ways. On the positive side stands broadcast TV, that sees an increased viewing in Q2 for the first time in five years. However, it seems to be a short-lived gain. Recent figures show that viewing is again decreasing. 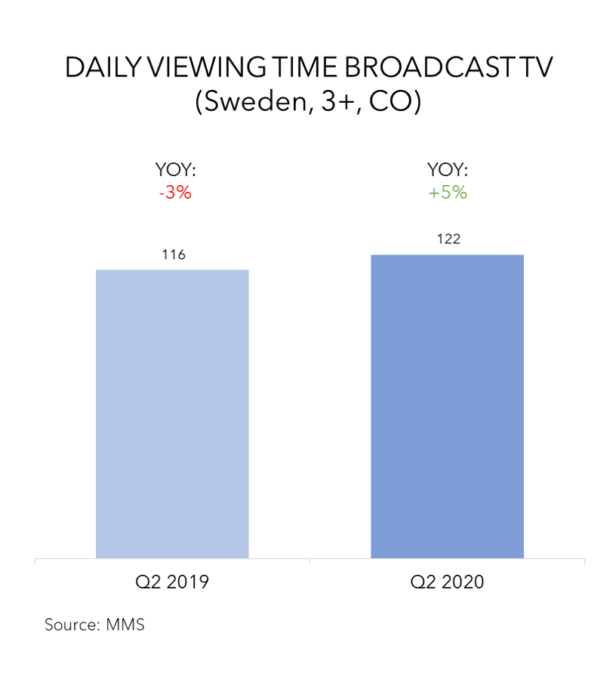 Unfortunately, this seems to be a short-lived gain. The increase in broadcast viewing has fallen from 15% in April to -3% in June. Recent figures for August (1 – 19 August) show that broadcast viewing decreased by -11% comparing YOY. Cancellations and postponing of major productions and sports events have naturally had a play in this development.

Another complicating factor is that the increase in viewing is entirely driven by older targets. While 60+ upped their viewing by 14% in Q2 2020, viewing in all other target groups decreased. This implies that the negative trend for broadcast viewing is persistent. Increasing online viewing supports this notion, as is evident in Mediavision’s Q2 TV & Streaming report that will be released end of this week.

TikTok Prepares for Lawsuit Against Trump

Following President Donald Trump’s executive order demanding ByteDance to divest its TikTok operations in the US, the company has decided to file a lawsuit against the administration. Trump has given TikTok until Nov 12th to sell or spin off its US business.

Designed to ease the process of choosing what to watch in Netflix’s extensive library, the streamer is now trialing a new feature – the “Shuffle Play” button. When pressed, Netflix will randomly play content based on what the account has viewed in the past.

Sports streaming service DAZN is looking to raise $1 billion in a new funding push – following a period of heavy spending on sports rights, including the Champions League and Ligue 1 rights in four countries. DAZN plans to expand to 200 countries in 2021.

Mulan to be Available via Apple & Google

As reported last week, Disney’s Mulan will be released on Disney+ for an additional fee. Disney has now announced that the movie will also be available via Apple, Google and Roku – but not on Amazon.

As Amazon has unveiled plans to launch its e-commerce in Sweden, the company is now approaching Danish publishers looking to sell their books on the platform. So far, Gyldendal has entered an agreement, while Lindhart and Ringhof declined.

Following the pandemic, the Champions League had to be concluded in a different way than previously – single-legged ties over an 11-day period. UEFA are now reportedly discussing making this change permanent.

On Monday, Spotify revealed its latest venture as exclusive audio service provider for Riot Games flagship title League of Legends. The deal includes an original podcast series focused on the game in addition to special music and playlists.

In June, Bauer Media threatened to leave Norway due to not receiving helping funds following the pandemic. Now, the company has made a turnabout and instead launches 15 new radio channels – only to be listened to online.

The current rightsholder of Scottish Premier League, NENT Group, has extended its rights to the league until the end of the 2024/2025 season. The rights are pan-Nordic.

DAZN and Amazon to Stream Bundesliga

During the upcoming 2020/21 season of Bundesliga, sports streaming service DAZN and Amazon Prime Video will stream fixtures on Fridays. This comes as a result of a court ruling upholding Eurosport’s contract with the league.

Cinemas worldwide were very early subject to an almost complete lockdown, regardless of all other pandemic-fighting strategies. This was true also for Sweden. Consequently, the revenues of cinemas have been highly affected.