Yesterday, Netflix reported its’ first quarter figures for 2021. Subscriber growth fell short of the company’s own guidance, partly explained by the pandemic and thus a lighter content slate in H1 2021. Mediavision Nordic figures for the first quarter are confirming the somewhat weaker development. Netflix’s growth was below the general market trend in Q1.

Mediavision is following all online video services in the Nordics and based on the Q1 analysis, the conclusion is that Netflix’s Nordic growth YOY falls below the general SVOD market growth during the quarter. The subscriber figures for the Nordic¹ market show a YOY growth of 5%, corresponding to approximately 200 000 new subscribing households since Q1 of last year. Hence, Netflix total Nordic subscriber base now amounts to approx. 4,4 million subscribing households. This means that Netflix’s growth underperforms vis-à-vis the overall Nordic SVOD market growth (+8% year-on-year). The Nordic countries are all highly digitalized, partly driven by actors such as Netflix. The SVOD penetration as a Nordic average is approximately 60% in Q1. Mediavision analysis points at new actors taking market shares and that Netflix, albeit still the single largest SVOD service, is not the front runner in terms of growth. 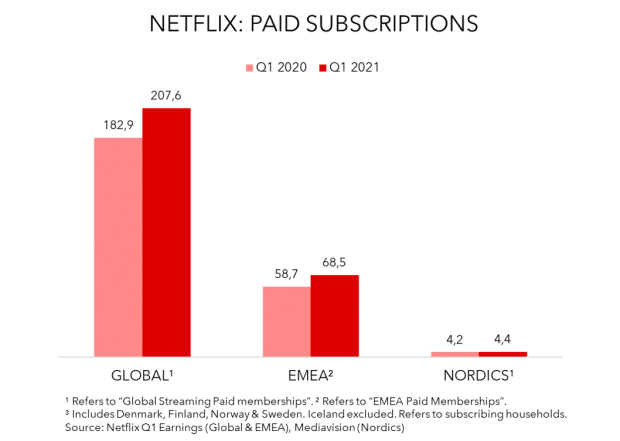 Netflix recognized two reasons believed to have slowed down growth globally. First, the push from the Covid-19 pandemic in 2020. Second, the lighter content slate in the first half of 2021 – also a consequence of the pandemic since it caused delays in production. As the roll out of vaccines are now ongoing, Netflix has resumed production in all countries except for Brazil and India. Hence, Netflix announced yesterday that USD 17 billion will be spent on content production in 2021. In 2019, the company spent USD 14 billion, and in 2020 USD 12 billion – so this represents a noteworthy uptick.

At its ‘Spring Loaded’ event yesterday, Apple presented the AirTag items tracker and new editions of iPhone 12, iPad and Apple TV, in addition to the new feature ‘Podcast Subscriptions’. The feature allows users to support podcasters through the Podcasts app.

Qobuz, originally from France, is a music streaming service focused on streaming and downloading high-resolution music. The service launches with pricing starting at EUR 19.99.

In the coming months, Facebook will roll out a series of new audio features. These include Live Audio Rooms – with striking similarities to Clubhouse, and Soundbites, there users can create and share short audio clips.

Skavlan Steps Down After 12 Years

Fredrik Skavlan will step down as host for Skavlan after this autumn’s season. The production company behind Skavlan, Monkberry, where Skavlan himself is the majority owner, will continue to produce “Carina Bergfeldt” for SVT.

On Monday, Facebook CEO Mark Zuckerberg announced that the company is deepening its relationship with Spotify. Facebook is building an in-line audio player allowing users to listen to songs or playlists being shared on the platforms without being externally linked to Spotify’s app or website.

In a letter sent to labels and publishers last Friday, Apple told artists it pays a penny per stream. Payments come out of monthly subscription revenue from users. This is roughly the double of Spotify’s payments per stream.

In the US, Discovery is launching its streaming service on Amazon Prime Video Channels. The offer includes an ad-supported version for USD 6.99 per month, with an ad-free tier to launch later.

Total online advertising revenue increased by 3.33% in Denmark during 2020, according to Danske Medier and Kreativitet & Kommunikation. This represents an increase of 282 million DKK, with the total market amounting to close to 9 billion DKK.

Amazon Launches Kids+ in the UK

Amazon has launched its service Amazon Kids+ in the UK. The service targets children aged 3-12 and provide access to an extensive library of books, movies, TV-shows, educational apps and games.