Earlier this week, the OTT titan Netflix confirmed its’ testing of a new subscription plan in Europe – the “Ultra plan”. How does Ultra differ from its three other subscription tiers? And why Ultra? This week, Mediavision elaborates on some of the questions around the Netflix pricing and packaging.

It is no news that Netflix is the leading streaming platform globally. And Netflix is probably the single most important phenomenon driving traditional media companies to re-think their strategies and sometimes even business models. Studies show that 40% of US viewers 18 to 34-year olds prefer Netflix when watching TV. The strong position of Netflix is also highly apparent here in the Nordics; out of a daily average of 8,6 million OTT viewers, does Netflix alone account for approx. 3,6 mill (15-74-year old’s) as earlier reported by Mediavision. In other words, Netflix is outplacing all other SVOD services in the Nordics.

Netflix is of course aware of its’ sweet spot and it is not surprising that it is experimenting with new pricing models. So, the Ultra plan is now being tested among some of its’ customers in Europe.

The Ultra plan is the most expensive Netflix service, reportedly with a price up to €19,99, but without any new features (compared to the current Premium plan). The difference is that the Ultra tier supports HDR, which Premium reportedly would not anymore. The Ultra plan is only tested among a selected group of subscribers and only in a few European countries, and these have reported different experiences of the Ultra plan. Firstly, the price differs between €16,99 and €19,99 between different test takers, secondly, Netflix has downgraded the features of the other subscription plans for some subscribers – but not to everyone. Among some subscribers that have been offered to try the Ultra plan, the features of the Premium and Standard subscriptions were downgraded, but remaining at the same price level. For these subscribers, the Premium plan has been reduced to only offer streaming to two devices simultaneously (instead as earlier to four), and no option for HDR. The Standard plan has also been reduced to cover only one screen (earlier two). However, for some other Netflix subscribers that are trying the Ultra plan, the other plans have been left the same. Netflix has confirmed that it is “testing slightly different price points and features to better understand how consumers value Netflix”. In other words, the rationale behind Ultra seems to be to make “improvements” pricewise – for Netflix, but not the customer, and to evaluate how highly customers value different features. It is, however, still uncertain if the Ultra plan will leave the laboratory and be rolled out for real, and how the Ultra plan in that case would affect the other subscription plans.

The Standard and Premium plans are currently the most popular tiers and if the features of these would be reduced, it is likely that some of these customers would level up and pay more – this is probably the question Netflix is hoping to answer with the ongoing test with Ultra. It can also be assumed that the Basic and Standard plans would be streamlined for smaller/younger households. Looking at historic price increases, e g 2017, Netflix subscription growth was not affected as shown below. 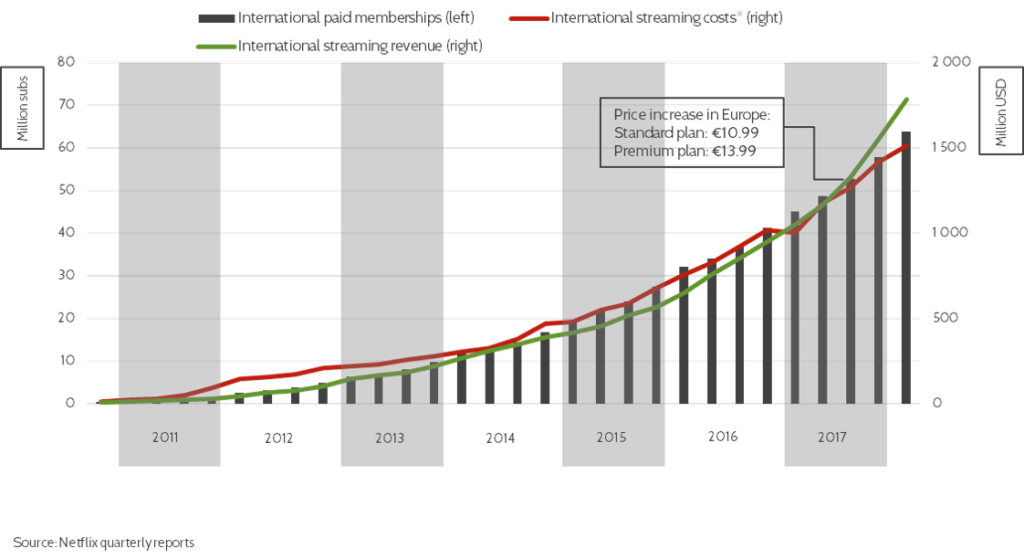 The paid memberships increased by +10% in international markets between Q3 and Q4 2017 in spite of the price increase. The outcome of higher prices and continued subscriber growth made Netflix’ contribution profit to increase by $72 million between the two quarters (amounting to a total of approx. $135 million in Q4 2017). In Q1 2018, the profit had increased to $272 million – which of course could be an important factor behind the new Ultra plan. The investment in content for Netflix has been increasing substantially over the last years and 2018 the company communicated a content budget of $8 billion.

But – an important but – is that Netflix obviously has not yet decided on the faith of the Ultra plan. It is still very much a case of “stay tuned” – nonetheless it shows the self-confidence of the company (reflecting on increasing prices by €3 to €6 without adding anything, less than a year after the last price increase). Time will tell how highly customers value Netflix; will they seek cheaper options among competitors if the Ultra plan is launched?

So, the enticing benefits for Netflix are obvious – higher revenues and better margins. But this could also be beneficial to local competitors, historically pressured by the market leader and its’ privilege to decide on qualifier levels as well as price points. Maybe it will also turn out that there is an opening for even lower-priced services, attracting economically conscious subscribers.