Newsletter September 26: Streaming of music and radio – in the Nordics and elsewhere

The Nordic radio and music streaming market is undergoing rapid transformation. This is also the case in the US, where we on Monday learned that one of Spotify’s contenders, Pandora, was acquired by SiriusXM. Looking at consumer behavior in the Nordics, Youtube Music is on the offensive, pursuing market shares following its recent launch in June. This may challenge Spotify’s dominant position in the Nordic region, as competition is ramping up and the audio streaming market matures.

First off, satellite radio company SiriusXM is acquiring US-based music streaming service Pandora for $3.5 billion. Pandora has roughly 70 million monthly active users, out of which 5.6 million are premium subscribers that pay $9.99 per month. Advertising accounts for close to 70% of the revenues according to the company’s Q1 report. Pandora’s basic offer is a radio-like service, but in addition a subscriber package was launched in 2017, called Pandora Premium (where users can create custom playlists). Pandora has had quite some headwind with its premium concept, as the US market seems to consolidate around major actors such as Spotify, Apple Music and Amazon Music.

According to half-year figures published by UK-based Midia Research, the global audio streaming market consists of approximately 230 million subscribers as of June 2018, up 15% from roughly 200 at the beginning of January. Spotify maintains a comfortable lead with a 36% market share, unchanged since Q4 17, runner-up Apple Music controls 19% of the market, adding 2% during H1 18. Amazon added half a percent of market share during the first half of the year remaining stable at around 12%.

Focusing on Sweden, Mediavision recently presented an outlook on the Swedish audio streaming landscape at Radio & Poddagen. Today, 6 out of 10 Swedes are paying for an audio streaming subscription. Roughly 75% of the consumer spend is allocated to music and the remaining 25% on audio book services. The music streaming market is transforming quickly, also pushed by new actors and services entering the fray.

In an international comparison, Sweden is a very strong market for music streaming. This is hardly surprising, as Spotify has its home turf in Stockholm. Out of money spent on music subscriptions, Spotify captured approximately 80% in August 2018. However, an actor such as Youtube Music, which launched in the Nordics in June, could potentially challenge this. Mediavision’s analysis reveals that Youtube Music is the second largest music streaming service on the Swedish market, but Spotify still reaches 10 times the number of subscribers. 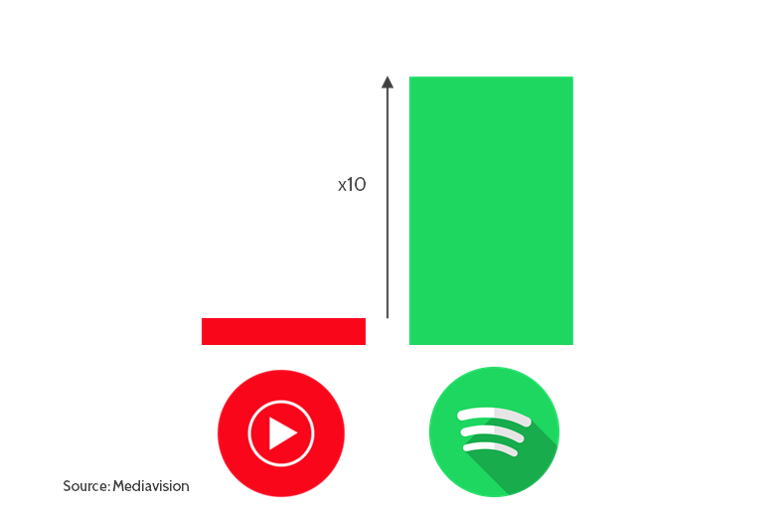 Bodyguard most watched drama since 2008
The BBC drama Bodyguard kept an average 10.4 million viewers as the series came to a close on Sunday, during the final episode viewership peaked at 11 million. No BBC drama has drawn a bigger audience since Doctor Who in 2008.

TV2 and NENT in Champions League conflict
In May NENT Group sold the rights to broadcast two matches per round of Champions League to Norwegian TV2. Now the two parties are in a disagreement regarding the games which TV2 has exclusive rights to.

Twitch blocked in China
Amazon-owned Twtich has recently been blocked in China. Following several e-sports events being streamed on Twitch during the Asian Games Twitch rose drastically in popularity. The reason behind blocking Twitch is unknown as of yet.

Comcast wins auction for Sky
Comcast has triumphed over 21st Century Fox and Disney in the auction for Sky with a winning bid of £30.6 billion. Sky has 23 million subscribers and will provide Comcast with a powerful launchpad for new digital services.