2018 has been an eventful year with several major sports events; probably an important reason behind the growing interest for premium sports on streaming services. Another interesting development is the increasing reach for off-shore brands on the Swedish gambling market – as we’re coming closer to the market re-regulation in January of 2019.

Premium sports subscribers moving online
Major sports events such as the Olympics and the FIFA WC have historically acted counterweight to the downward consumer trend in linear broadcast. But the negative trend is becoming apparent in sports as well. Premium sport SVOD (subscription video on-demand) has increased in household penetration by 31% YOY, which marks an even larger increase than SVOD in total, +25% YOY.

The total base of sports subscribers in Sweden has remained stable at around 17% (Q2 17 – Q2 18) of households. This indicates that existing subscribers are migrating from traditional pay TV to SVOD.

Gambling reach on an upswing, re-regulation draws near
In Mediavision’s analysis on the Swedish gambling market Swedish Gambling Insight, we conclude that overall gambling reach is rising. Among 18-74-year-olds, monthly gambling reach has increased by 12% YOY, hence 56% gambled during the first half of 2018.

As opposed to Lotteriinspektionen’s study “Allmänheten och Spel 2017”, pointing at a downward trend, Mediavision is confident in an upward trend. 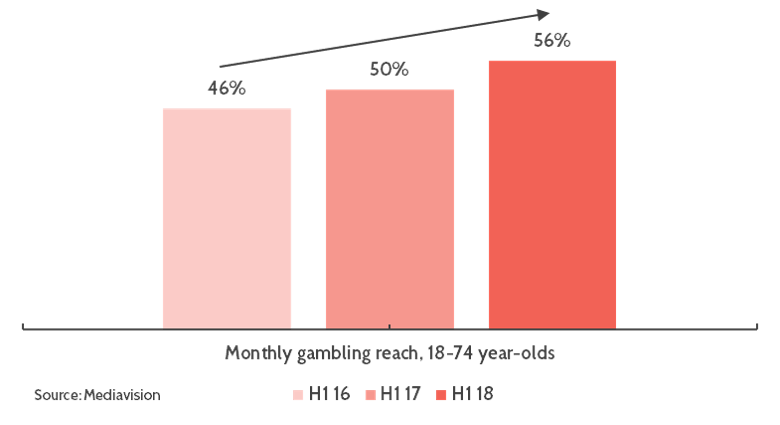 As the re-regulation takes effect on January 1st, 2019, several off-shore gambling giants will establish themselves in Sweden. As evident by the British gambling giant William Hill’s recent bid to acquire online casino company Mr Green. This also means that they will compete on equal terms with the state-controlled Swedish actors – perhaps even challenge their dominant position.

When comparing the Swedish and the off-shore actors, the former have the most active customers and attain the highest share of deposits. This is an indication that the incumbents are likely to retain their dominant market share, at least for a while. Mediavision is following the development closely moving forward. If you’d like to know more, our full analysis on the gambling market is available for purchase, read more here.

Amazon rules out AVOD service
Recent reports and speculations suggest that Amazon plans on launching an ad-supported free version of its Amazon Prime Video service. During its third quarter earnings call director of investor relations Dave Fildes said the company has no such plans.

Audio streaming on the rise in Denmark
According to a study conducted by the Danish bookstore Saxo.com audiobook streaming services are increasing in popularity. The share of Danes who subscribe to an audiobook service amounts to 34 percent, up from 22 percent last year.

Be careful what you wish for: Sweden Revamps Rapidly Ahead of Regulation
Newly regulated Sweden is working furiously to address current and future issues in anticipation of new-look regulation taking effect in 2019. Mediavision released data findings indicating […].

Netflix Q3 Swedish home penetration up 40% vs 31% global growth
Netflix’ Swedish household penetration rose by nearly 400,000 or 40 percent to almost 1.45 million in the third quarter of 2018, according to consultancy Mediavision. This compares […].