The growth of paid video streaming services (SVOD) has characterized the Nordic video market for several years, 2019 being no exception. Although local actors have grown substantially on all Nordic markets, Netflix continues to hold a unique position. More than 4 million Nordic households now subscribe to Netflix.

Half of the Nordic households are now subscribing to a paid streaming service (SVOD). This represents an overall growth of approx. 15% compared to the fall of last year. The market is still dominated by Netflix, which has continuously added subscribers since the Nordic launch in 2012. Today, nearly 70% of the approx. 6 million Nordic SVOD subscribing households hold a Netflix account – resulting in a subscriber base of more than 4 million households. 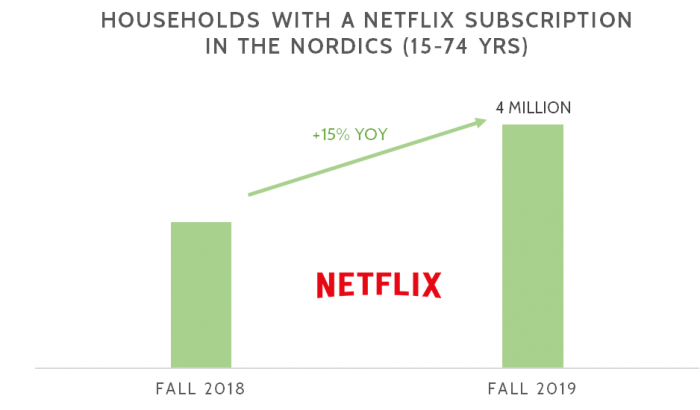 Netflix´s annual growth is on par with the total SVOD market growth in 2019. However, several other services have attained a larger annual growth than the market leader. Local and regional actors such as Viaplay (Nordics), TV2 Play (Denmark), TV2 Sumo (Norway) and Ruutu+ (Finland) all added subscribers at a higher rate than the Nordic market average. Given that the majority of Nordic households (70%) already subscribe to Netflix, the local services are generally stacked. This means that they are added on top of an already existing subscription – which in most cases is Netflix.

Looking towards 2020, new global services are expected to enter the Nordic market. Competition on the SVOD market is vastly different today than upon the Nordic launch of Netflix back in 2012. The market leader’s position has solidified as the “basic” offering for SVOD, while other services act as supplements (often providing sports or local content). The question remains – which of these service types will Disney+ and the likes affect the most?

The Danish media rights of UEFA Euro 2020 has been divided between NENT and DR. All of the 51 games will be available to stream through Viaplay, while the TV3-channels will host the broadcasting. DR will air the majority of Denmark´s games during the group stage.

Netflix dominates Golden Globe-nominations
This year´s nominations for the Golden Globe are dominated by streaming service Netflix, across both TV and movie categories. In total, Netflix received 34 nominations, compared to HBO´s 15. Hulu and Amazon Prime received 5 nominations each, while FX got 4.

Disney+ Acquired 15 million Subscribers
According to data gathered by research company In My Area, Disney+ attracted approximately 15 million domestic US subscribers in the first five days following the launch. This figure may be compared to the 1.1 million subscribers gained by Apple TV+.

EBC Signed Deal with UEFA
UEFA has signed a deal with The European Broadcasting Union (EBU) concerning the media rights to Women’s Euro 2021, amongst other properties. The EBU is an international alliance of 56 public service media organisations. Members include NRK, DRK, SVT and the BBC.

Podimo Reaches 75 000 Users
The Danish podcast platform Podimo, first launched in September. According to a press release, they have managed to attract 75 000 users since the launch. Recently, the first subscribers have begun to pay for their accounts, following the end of the free trial period.

Amedia Acquires Nu Publishing
Norwegian media house Amedia has purchased Nu Publishing, the parent company of digital subscription newspapers Bodø Nu, Rana No, Webs No and Lynx. Nu Publishing has so far made sales of around 22 million NOK during 2019 and currently has 6 600 subscribers.

Tele2 and Telia Unable to Reach Agreement
On Wednesday, TV4 and its´ sister channels were made inaccessible for customers of Com Hem. This is the result of owners Telia and Tele2 not reaching an agreement regarding the terms of condition for the future broadcasting of TV4 and C More through Tele2/Com Hem.

Esports to Join the Sports Emmy´s

The National Academy of Television Arts & Sciences has announced that “Outstanding Esports Coverage” will be added as a Sports Emmy Award Category, the first award category of its kind. However, esports entries have been nominated in the past.

Norwegian viewers spend more on TV and video streaming than Nordic neighbours
Spending on television and streaming services is higher in Norway than in the other Nordic countries, according to consultancy Mediavision.