Today, Mediavision releases its Q1 analysis of the Swedish TV and streaming market. For the first time since the Netflix’s launch in Sweden 2012, there is no growth YOY in SVOD household penetration. However, the market shows a substantial growth in number of subscriptions. And according to the consumers, this trend will continue in 2020.

Since 2012, streaming services have seen a significant growth on the Swedish market – with Netflix as the frontrunner. Mediavision now reports that Q1 2020 is the first quarter with no year-on-year growth in household penetration. However, there is a substantial increase of SVOD subscriptions, indicating a solid interest in the already existing streaming households. Within a year, 400,000 new SVOD subscriptions have been added, an increase of close to 10%.

And the appetite seems to increase. In 2020, consumers intend to sign up for another 800,000 SVOD subscriptions. Behind this strong growth are several new services from operators such as Telia, Com Hem and Telenor. There are also new and appealing direct-to-consumer services like Disney’s new SVOD service, that is expected to launch in Sweden later this year.

As a result of this increase in number of streaming services per household (stacking), the market is predicted to grow significantly in 2020. 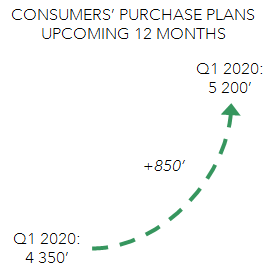 The Mediavision Q1 analysis also reports on some of the viewing effects related to the corona pandemic. For example, online viewing increased approx. 10% in the last two weeks of March. And an even stronger impact is expected in the second quarter. Mediavision closely monitors these developments.