Expectations are high for Spotify’s Q1 earnings call today. Early reports state that music streaming has decreased globally amid the Corona pandemic, partly due to less commuting and music played in the hospitality industry. However, global revenues for Spotify are expected to increase. Figures from Mediavision’s Nordic analysis Q1 2020 show subscriber growth, though not in parity with Spotify’s expected global performance.

Prior to Spotify’s earnings call on Wednesday, analysts at Alphastreet expect Spotify’s global revenues to increase by 17%. The company’s own global outlook for Q1 estimates a year-over-year growth in monthly active users and premium subscriber of around 30%. 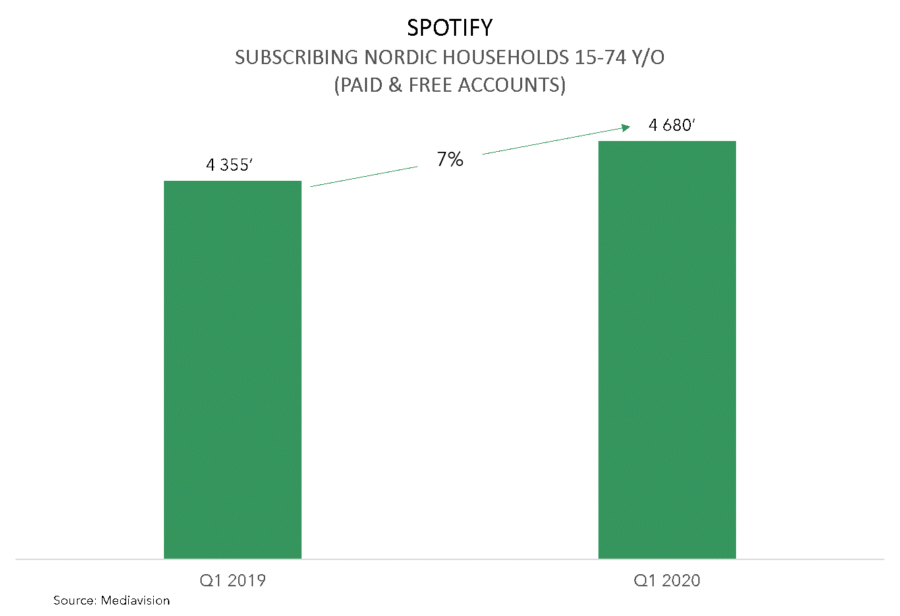 Simultaneously, another giant actor is ramping up its efforts in this industry. Last week, Apple disclosed that Apple Music is now available in 52 new markets, total availability being 167 markets. According to Counterpoint, Apple Music’s subscriber base grew by 36% globally in 2019, resulting in a market share for paid subscriptions of 19% compared to Spotify’s 35%.

Another very interesting area is the podcast development. Spotify and Apple, along with other major players, are moving very quickly towards a more advanced market for spoken content. Mediavision will shortly release the Q1 report on the Nordic Podcast Market.

In collaboration with Nordisk Film, TV 2 Norway is expanding its streaming service Sumo to TVOD. Currently, 50 movies are available for rent or purchase via the service.

According to Readly’s annual report revenues increased +35% to approx. 265 million SEK in 2019. However, operating loss also increased by 33% and cash flow amounted to a negative -115 million SEK. Further, Covid-19 has had positive effects on Readly’s business.

In a livestream, Facebook CEO Mark Zuckerberg announced an update to Facebook Messenger called Rooms, allowing up to 50 people to interact via video simultaneously. Messenger Rooms will be integrated with Facebook’s other products InstagramDirect, WhatsApp and Portal.

Late in May this year, YouTube will host a 10-day virtual film festival with 20 renowned partners, including Cannes Film Festival, Venice Film Festival and Sundance Film Festival. The event will be free of charge via YouTube’s own site.

Google and YouTube’s parent company Alphabet disclosed their Q1 earnings on Tuesday. Both revenues and profits are up, despite a decrease in advertising revenue during the latter part of March. Revenues increased by 13%. The stock rose by 3,4% following the call.

TV 2 Norway has acquired the rights to broadcast all the UEFA Champions League football matches from 2021-2024. Hence, the tournament ends up with TV 2 in Norway, after TV 3 and NENT Group have hold the rights for the last three decades.

The Oscars are making a one-time-only concession by allowing movies initially made available throguh streaming or VOD-services to compete for the prestigious award of best picture in next year’s awards. The reasoning behind include consideration of the Covid-19 pandemic.

Today, Mediavision releases its Q1 analysis of the Swedish TV and streaming market. For the first time since the Netflix’s launch in Sweden 2012, there is no growth YOY in SVOD household penetration. However, the market shows a substantial growth in number of subscriptions. And according to the consumers, this trend will continue in 2020.