Mediavision: Q3 – 700 000 SVOD-subscriptions Added in One Year, Netflix Drops for the First Time

During the past year, Swedish households have purchased an additional 700 000 new SVOD-subscriptions. Hence, paid video services have reached a new record level in Q3 2020 following strong growth compared to the equivalent period last year. Further, Mediavision’s analysis of the third quarter reveals that Netflix, for the first time since its launch in 2012, has lost subscribers. However, Netflix is still the market leader.

Mediavision’s analysis conclude that in Q3, Netflix had approximately 1.5 million paying households in Sweden, following a loss of approx. 110 000 subscribers compared to the same period in 2019. Given that the total market is expanding, Netflix’s market share has decreased. Recently, Netflix reported diminishing growth for Q3 in the EMEA-region (including Europe, the Middle East and Africa). 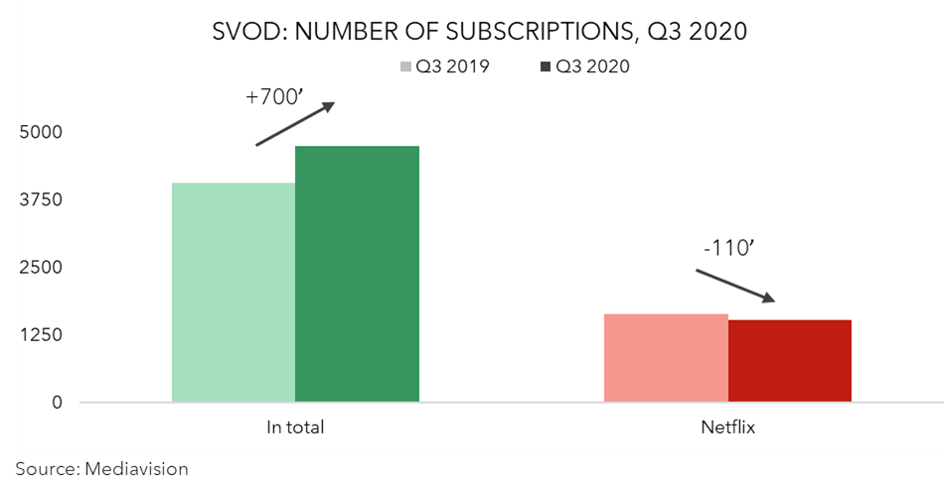 The substantial growth in number of subscriptions in Sweden is largely explained by the fact that households now acquire a greater number of subscriptions, often referred to as “stacking”. For the first time, SVOD-households in Sweden now subscribe to more than 2 services on average. The appetite for SVOD remains high and many express interest in subscribing to more services. Mediavision’s analysis points towards a continued, strong growth.

– The third quarter presents an interesting development on the Swedish market. For the first time, SVOD-households subscribe to more than 2 services. It is also the first time that we see a decrease for Netflix. We believe that overall growth will continue, especially given the fact that we are approaching the big holidays, comments Marie Nilsson, CEO of Mediavision.

Mediavision is an independent analysis and consultancy firm, focused on analysis and
strategy within traditional and digital media. 3,000 respondents between the ages 15 to 74 are surveyed each month in Sweden.