Newly released figures from Nordic analysis firm Mediavision concludes that the Covid-19 pandemic has not negatively affected consumers’ willingness to pay for media so far. The average household in Denmark, Finland, Norway and Sweden spent approximately EUR 70 per month on media during fall of 2020. This is similar to early 2020 – before the pandemic.

The Nordic households’ spend on media and mobile/broadband services totals EUR 150 per month, split evenly between the two categories. Focusing on media services, video is by far the largest category, e.g. including pay TV, streaming and cinema. Cinema spend has been hit very hard by the pandemic, but video as a total keeps its number one position in the households. Cinema has lost more than 50% in average Nordic household spend compared to the same period 2019. 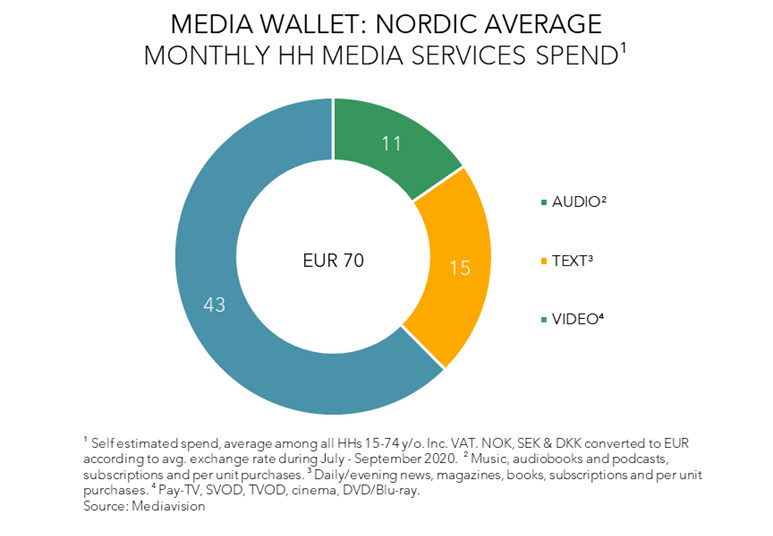 There are significant differences between the Nordic countries. For example, households in Denmark pay almost 30% more for video than the Nordic average. Denmark has a traditionally strong pay TV market which is still comparatively resilient despite the increased competition.

Finland is the only country where household spend on media and mobile/broadband services declined significantly during 2020. This development was driven by lowered spend on text and video. However, Finnish households pay significantly more for newspapers – given a robust print market.

In Norway, the overall consumer spend on media is high, almost 30% above the Nordic average. Norway is also the only country where spend on media increased during the fall, albeit by little.

Like Finland, Swedish households spend less on media than the Nordic average – especially on video. Lower video spend is driven by cinema shutdown and a high degree of digitalization in the subscription business. But like the other Nordics, video still represents the largest share of media spend.

Looking at 2021, Mediavision predicts that the importance of consumer revenues will increase further, as the media industry needs to mitigate the weakened advertising market.

Mediavision is an independent analysis and consultancy firm, focused on analysis and strategy within traditional and digital media. 6,700 respondents between the ages 15 to 74 are surveyed every six months in the Nordics.