The fierce competition on the video streaming market shows no signs of slowing down in Q1 – quite the contrary. Following a strong and pandemic-induced growth in 2020, customer retention is likely one of the most important issues this year for all SVOD services. Mediavision’s Q1 analysis shows that frequent usage plays a key role in reducing churn.

Loyal customers and long-lasting relations are key on a quickly maturing SVOD market. Inducing high engagement (i.e. viewing) is paramount – both in frequency and time spent. During Q1, Mediavision has analyzed how frequently households in Sweden engaged with the services they subscribe to. Most commonly, the services were used 1-3 days a week. Only 14% of the hosuseholds claimed a 7-day-usage an average week. Maybe a bit worrysome, almost 25% quantified a “no-usage” at all an average week. 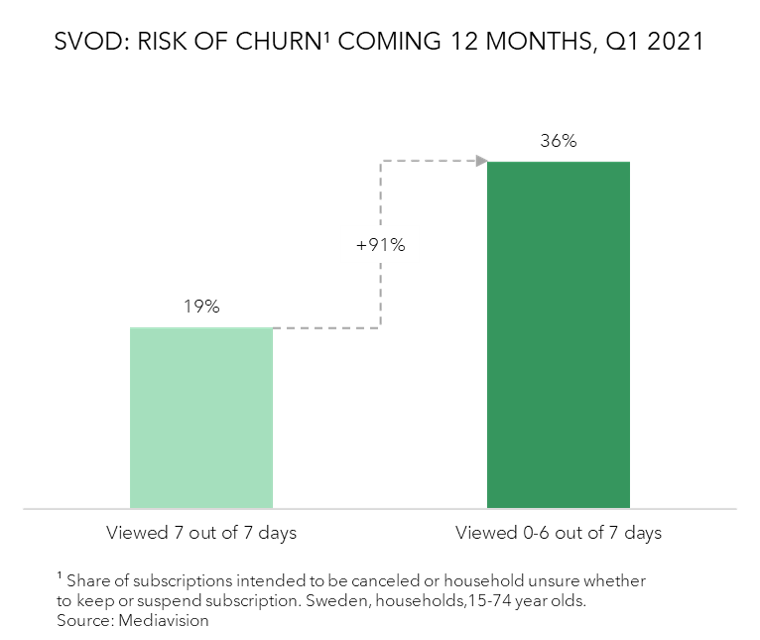 Mediavision analysis points to a strong correlation between frequent use and low risk of churn. Among those that adhere to using their SVOD services 7 days a week, the risk of churn is significantly lower than for all the other customers. For those claiming a usage of the service 0-6 days a week, the churn risk increases by more than 90% compared to the daily users. Market leader Netflix stands out; high-frequency usage and significantly lower churn risk among its’ subscribers.

To conclude: Consumer engagement is the name of the game as we approach market saturation.

TV2 Denmark has entered a new partnership with ViacomCBS ‘streaming service Paramount+. TV2 Play customers get free access to Paramount + in July and can then purchase the service at a reduced price.

The Norwegian Competition Authority believes that Bonnier’s planned acquisition of a 70% ownership stake in Strawberry could weaken competition in the market. Strawberry is currently Norway’s fourth largest general publisher.

Netflix has introduced a new feature, that by using an algorithmic curation, suggests titles that fits the user based on profile and viewing history.

This Thursday, cinemas in Denmark will reopen following several months of closure. Postponed premieres in 2020 will result in almost twice as many weekly premieres in 2021 (as of May) as last year; 4 per week compared to 2.3 in 2020.

Twitter users with more than 600 followers are now able to host audio discussions on Spaces – and the possibility to charge for tickets will soon be available. Twitter will take a cut of those transactions.

A beta version of the Clubhouse application will now be tested among a small group of non-employees who will provide the company with early feedback ahead of a public launch.

In the Nordics, approximately 3 million people (equivalent to 15 per cent of the population 15–74-year-olds) listen to podcasts on an average day, according to Mediavision’s Q1 figures.