During 2021, we have witnessed the impact of social media phenomenon Tiktok also on the Nordic video market. The Chinese platform is clearly a real challenger to several of the already-established services, both in reach and share of viewing. Will the success of Tiktok spark a new life to AVOD in the Nordics, which has long been overshined by SVOD?

Tiktok, the video-focused social networking service owned by Chinese company ByteDance, has become immensely popular in the Nordics during the past two years – especially among the younger demos. After gaining a real momentum in this part of the world during the first months of the pandemic, the service has seen new record growth in daily reach. 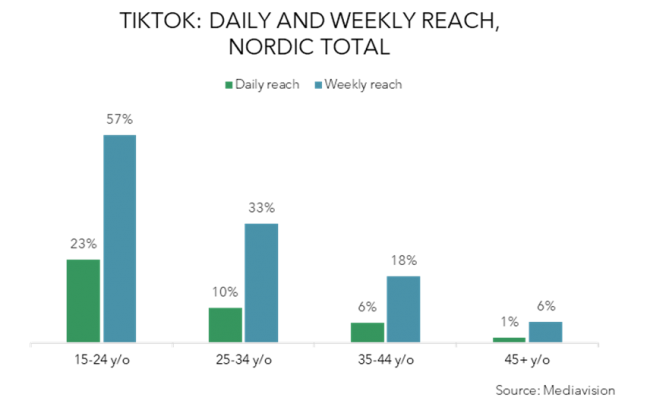 Tiktok, highest growth of online video services in the Nordics, challenging the giants

In the fall of 2021, Mediavision recorded a +30% Nordic growth for Tiktok year-on-year – the biggest relative growth of all services in the region. This resulted in a Tiktok daily reach of 1.1 million 15-74-year-olds in the Nordics, with a heavy skew towards the young. At the same time, its biggest rivals (and market leaders) Youtube and Facebook saw significant drops (-12% and -24% YOY respectively) in daily reach. However, Youtube still has the highest reach of all online video actors in the Nordics, with a total of 4.7 million 15-74-year-olds daily. Facebook reaches approximately 1.3 million and Instagram approximately 1.1 million.

In Meta’s Q4 2021 earnings call (where Mark Zuckerberg announced that Facebook had lost daily active users for the first time ever), Zuckerberg spoke about Tiktok as the main source of competition for Facebook and why the focus on Reels will be so important going forward. He expressed awe at the app’s ability to keep growing at such a rapid pace, despite already having more than a billion active users.

As shown in the graph above, it is mainly the younger target groups that has embraced Tiktok. Figures from Mediavision’s latest analysis of the Nordic TV & Streaming market show that more than half (57%) of the Nordic 15-24-year-olds uses Tiktok on a weekly basis.

Could Tiktok spur growth of AVOD in the Nordics?

Tiktok’s success has initiated a reawakened interest in ad-financed online video. For long, in this part of the world, AVOD has been overshadowed by SVOD. However, 2021 has brought about some changes indicating that we are approaching a new phase. Mediavision can conclude that AVOD had a higher weekly reach than SVOD in 2021 and that turnover for AVOD increased substantially (34%), by far exceeding the rate of growth for other video segments – SVOD included.

And we are not alone, AVOD is on the rise also in the US. A recently published report by Kantar determined that in 2021, ad supported tiers were the biggest drivers for subscription growth in the US. Especially Comcast-owned Peacock, a hybrid AVOD/ SVOD service performed particularly well – beating its user target in Q4 2021.

Advertising investments in social media expected to reach 5.5 billion by 2022

Tiktok is not only attracting the interest of consumers, but also advertisers. In Sweden, IRM estimated that the category social media (Sociala nätverk), including Tiktok and its competitors (Facebook, Instagram, LinkedIn etc.), attracted media investments of SEK 3.9 billion in 2020. The estimate for 2021 is SEK 5 billion, hence a growth of approximately 30% year-over-year. IRM also expects this category to see continued growth. According to the current forecast, investments will amount to SEK 5.6 billion by 2022. It has been proven before – a quick digital transformation once the tipping point is passed. Could it be that Tiktok is the new driver for advertisers in the Nordics?

Or will subscription models increase in importance for the social media actors?

Simultaneously, we have seen a rise in paid subscription models on social media recently, as previously in podcasting etc. Both Tiktok and Instagram (Meta) are planning incentivising strategies for some of their creator bases. Tiktok is beta launching the ability for creators to put their content behind a paywall and in the US, Meta is beta launching paid subscriptions where creators can make some content exclusive to paying followers. Will social media platforms move towards a hybrid business model going forward?

Regardless, we may conclude that both Tiktok and AVOD have been on the rise during 2021, and our findings points towards continued growth in 2022.

P.S. An interesting observation is also that Tiktok seems to have power over more than how or where young targets consume online video. Products that ‘goes viral’ on Tiktok – often featured in videos with the hashtag #Tiktokmademebuyit – have seen an immense surge in sales. This also extends to printed books, a media category that has sparked little interest among the younger demographics as of late. The “BookTok” community has pushed old books back to the top of bestseller lists, in addition to helping launch the careers of new authors. Videos with the BookTok hashtag have gathered a collective 34.5 billion views (as of February 2022).