Mediavision: More than 1 million households subscribe to an audiobook service

Mediavision’s Q1 analysis of the Swedish audiobook market reveals that for the first time, more than one million households subscribe to an audiobook service. However, compared to the same period last year, the subscribing households pay less for their subscriptions – impeding total market revenue growth. Mediavision concludes that this is an effect of fierce competition and increasing price pressure on an array of similar offers present in the market.

The Swedish audiobook market shows strong subscriber growth. Approximately 280 000 households have been added over the past 12 months, from end of Q1 2021 to Q1 2022. Today, audiobook penetration is 24 percent, thereby surpassing one million subscribing households for the first time. This is particularly interesting since growth in subscriptions cannot be attributed to the pandemic and the subsequent heightened interest in paid media services. 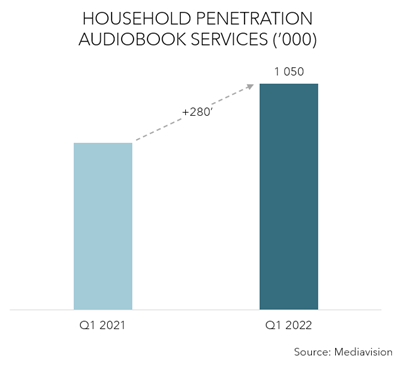 Nevertheless, the great number of households added to the market have not resulted in an equally large growth in turnover. On average, subscribing households pay less today than they did in 2021, a consequence of strong competition. In total, this renders Mediavision to estimate that revenue growth in Q1 2022 amounted to +14 percent, compared to the average quarterly turnover in Q1 2021.

– Demand for audiobook service continues to grow. The fact that 280 000 new households have been added to the market in the last 12 months is solid proof of this, comments Marie Nilsson, CEO of Mediavision. However, growth is spread across many actors on a highly competitive market. Households are constantly looking for new and better deals, shifting service provider. This leads to a decrease in average household in Q1 2022, compared to the same period last year, which suppresses total revenue growth.