Mediavision: Disney Plus celebrates 2 years in the Nordics with 1.7 million subscribing households

On September 15th in 2020, Disney Plus entered the Nordic region. After only 24 months, the service has attracted more than 1.7 million subscribing households on the fiercely competitive Nordic market. The service has especially gained a strong position within the kids and family segment.

This Thursday marks the second anniversary of Disney Plus in the Nordics. In only 24 months, the service has attracted more than 1.7 million subscribing households in Denmark, Norway, Finland, and Sweden – which means that it is the fourth largest service in the region. 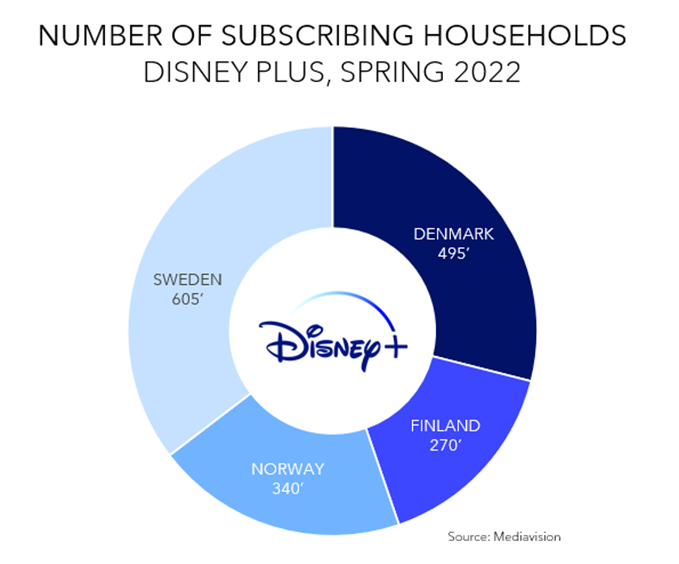 -It is not an overstatement to say that Disney Plus launched with a bang on the Nordic market. The service reached a household penetration of 10% in the Nordics in only two weeks – boosting stacking and subsequently household spend. However, a lot has happened these past two years, says Natalia Borelius, senior analyst at Mediavision. The streaming market is saturating, causing actors to search for new ways to boost subscriptions and increase revenues. Many actors are betting on adding hybrid subscription/advertising tiers – and Disney Plus is one of them. Mediavision follows these developments closely – and will shortly release new figures on the Nordic SVOD market’s development so far during the second half of 2022.

Mediavision is an independent analysis and consultancy firm, focused on analysis and strategy within traditional and digital media. 6,700 respondents between the ages 15 to 74 are surveyed biannually in the Nordics.