Households in Sweden spend an increasing amount on media. No cuts to the households’ media budgets have been observed, despite increased concerns regarding the economy. During the third quarter, a Swedish household spent SEK 714 per month on media. Both text, audio and video services grew compared to the same period last year – but video grew the most in absolute terms.

So far, increasing economic concerns have not resulted in cuts to the households’ media budgets. On the contrary, Mediavision’s latest analysis shows that household spend on media continues to increase. A household spends on average SEK 714 per month on media, which is more than during the second quarter and an increase of 10 percent compared to the same period last year. Moreover, if the public service tax is added to this figure, it would add a maximum of SEK 111 per month and person. All media categories – audio, text, and video – show growth. Video grew the most in absolute terms, 11 per cent or SEK 42, compared to the same period last year. 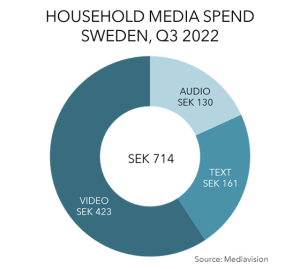 However, there are signs pointing to a shift at a later point in time. A third of the households say that they would cut their media spend given that their economic situation would worsen, for example due to a recession. However, this does not seem to have occurred yet.

– So far in 2022, the conclusion is that total media spend continues to grow, despite increasing uncertainty regarding the economy. However, this might change if the situation for the households worsen going forward. A third of the households state that they would decrease their media spend, given a worsened economic situation, comments Marie Nilsson, CEO of Mediavision. However, a larger share state that they would lower spend on other categories than media, given a worse household economy. For example, entertainment and traveling are mentioned by approx. 50% each. Mediavision tracks this development closely, both in terms of household plans and actual spend.