Consumer payments for podcasts have grown substantially. This is concluded in Mediavision’s third quarter analysis of the Swedish audio market. The podcast advertising market has also grown, demonstrating an increasing interest from listeners as well as advertisers.

Consumer payments for podcasts increased by 50 percent during the third quarter of 2022, compared to the same period last year. Consequently, annual revenue from consumer payments on the Swedish podcast market is expected to surpass SEK 150 million in 2022. This is concluded by Mediavision in its latest analysis of the Swedish audio market. 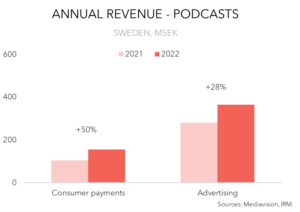 – Without question, the podcast market is experiencing growth right now, comments Marie Nilsson, CEO of Mediavision. Listening is increasing and more people pay to access content. In times of economic instability, consumer payments are vital for a lot of actors in the media industry, as they are often considered less sensitive to macroeconomic fluctuations than advertising investments. Hence, consumer payments could become even more important for podcast actors in the near future, should 2023 bring about a tougher climate on the advertising market.