Mediavision’s latest analysis of the Nordic media market shows that the number of digital media subscriptions per household has grown to new record levels during the fall of 2022. Growth is driven by an increased penetration of audio subscriptions, in particular audiobooks and podcasts.

Today, a Nordic household holds on average 2.6 digital media subscriptions, which is a new record. This number is close to 20 percent higher than a year ago, as all media categories have grown. 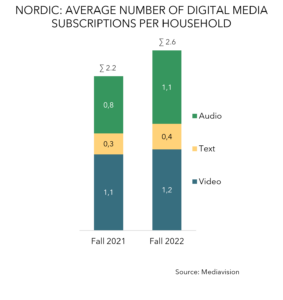 Growth primarily stems from audio subscriptions, which for the first time surpasses 1 subscription per household. Within the audio category, both audiobooks and podcasts increase. Paid music subscriptions have been quite stable over the past years, with an average Nordic household penetration of 45 percent. Despite a substantial increase in stacking, Nordic households’ digital media spend have increased by merely 3 percent compared to the same period last year.

– Despite the looming threat of a recession, the Nordic appetite for digital media subscriptions continues to grow. This is of course partly explained by the ongoing transformation to digital. But we also see that digital media spurs an increasing interest for paid media in general, comments Natalia Borelius, senior analyst at Mediavision. Given the households’ current purchase plans, growth seems to continue during 2023. This could of course change, if the economy would take a turn for the worse.