As the holidays are approaching, so is peak season for streaming. Now we watch more movies, series and documentaries than any other time of the year. Focusing on the programming of these services, Mediavision can conclude that to a very high degree the English-spoken content is dominating.

Streaming services in the Nordics are largely dominated by foreign, English-language content. Almost 70 percent of all hours of fiction and entertainment on the SVOD services are of non-Nordic origin. The big libraries of the global SVOD services are mainly built up by international and specifically US content. Nordic programming represents a small share of the total supply. The appetite for local content is, however, greater. Bottom-line, the demand for local content is higher than the supply. 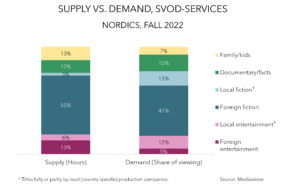 Global actors also seem to have noticed this wish among the viewers, as the attention to locally produced content has increased lately. For example, Amazon Prime Video recently announced a slate of 18 Nordic productions and entered a three-year deal with Nordisk Film. Disney Plus has announced its first Nordic original and Netflix’s first ever Nordic reality series is in the making. The highest share of local content is, to no surprise, found on the services of Nordic origin such as Cmore, TV2 Play, Ruutu Plus and Viaplay.

-The demand for local content is strong in the region and several SVOD services now increase their Nordic programming, comments Natalia Borelius, senior analyst at Mediavision. However, local productions often have a smaller target market which can make the cost aspect more challenging.