For the third consecutive year, Mediavision has asked stakeholders in the Nordic media industry to share their view on the future development of the Nordic market. The results of this survey, supplemented with reflections and analysis from the Mediavision team, is presented in Mediavision Industry Outlook 2022 – which is now available to all of you upon request – please send an email to julia.gotborg@mediavision.se to get your hands on a copy.

These were some of the main takeaways from this year’s edition.

About half of all respondents believe that household spend on audio book subscriptions and podcasts will increase in 2022. However, it is still less than last year. Mediavision concluded¹ that in 2021, more than 100 000 new audiobook subscriptions were added on the Swedish market – and growth was recorded in all Nordic markets. 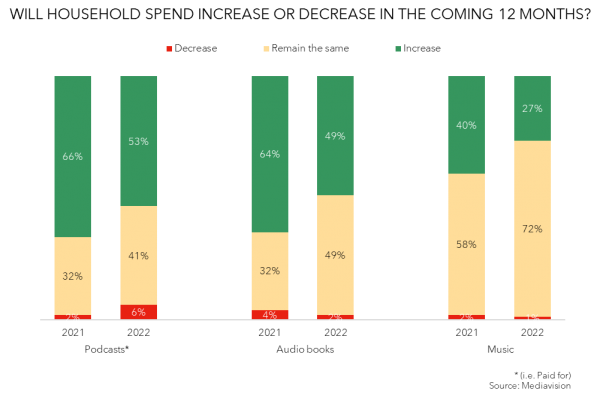 Paid podcast services are yet to gain a strong foothold in the Nordics, the largest pan-Nordic player is Patreon which attained a 3% household penetration in Fall 2021². Investments in the podcast area were heavy in 2021 and it seems this trend will prevail – both Apple and Spotify have introduced new tools for podcasters to monetize content.

About a quarter (27%) of the respondents believe that household spend om music will increase, which is less than last year (40%). Spotify is the undisputed market leader, with other global services as main challengers – but DK constitutes a special case as local actor Yousee Music is its prime competitor².

Text: The industry believes that print will remain resilient

Most respondents believe that household spend on digital magazine subscriptions will remain the same in the coming 12 months. As of Fall 2021, 29% of Nordic HHs spend on text media was digital – which is less than for audio and video – showcasing the significance of legacy business in text ¹.

Although the Nordic market for newspapers is becoming increasingly digital, only about half of all subscriptions are exclusively digital today². 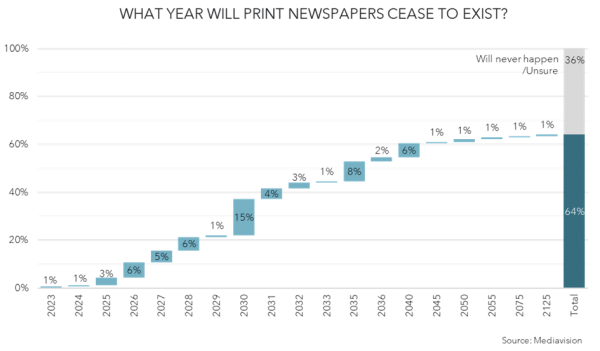 Video: Netflix’s pole position may be challenged by Disney and HBO

The industry believes that growth will continue in 2022; a vast majority (63%) of the respondents believe that household spend on SVOD will increase. However, this is a smaller share than when the same question was posed a year ago – back then, close to 90% believed that spend would increase. Conversely, 85% of the respondents believe that SVOD-subscriptions will increase – perhaps an expression of increased stacking and lower average expenditure per sub. 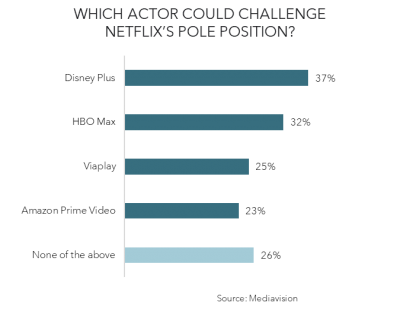 Netflix has had a pole position on the Nordic market ever since it was launched back in 2012, despite significant changes to the competitive SVOD-landscape. However, the vast majority (73%) of the respondents believe that one or several actors could challenge Netflix’s pole position before 2025.

Disney Plus and HBO Max are considered main contenders – both services have performed strong (re)launches in the last two years. HBO added +635’ households in the Nordics following the transition from Nordic to Max in Oct 2021 – which put HBO back in the top three of Nordic SVOD services¹.

Mediavision’s Nordic Sports Analysis 2021 concluded that winter sports are among the top 3 sports with the highest interest in Finland, Norway, and Sweden – however, Denmark stands out with winter sports placing as the 8th most popular sport. Regarding Ice Hockey, this sport attracts tremendous interest in both Finland and Sweden – while placing 9th in Denmark and 8th in Norway.

In Europe, Discovery reported that the opening week of competition at Olympic Winter Games Beijing 2022 drove “massive increases in engagement on Discovery+ and Eurosport digital services, as well as strong overall linear viewership across Europe”. Eight times more viewers were streaming Olympic content compared to the same period (the opening week) for the Olympic Winter Games in PyeongChang 2018.

Discovery has also shared some highlights in terms of viewing from the broadcasts across the Nordics.

In the US, the Olympics have been aggressively promoted by NBCUniversal via TikTok. Ahead of the event, news broke that NBCUniversal would team up with TikTok for an advertising partnership to promote the network’s coverage of the Olympics. Videos range from short clips of the competitions to athletes performing ASMR. By the end of last week, the @NBCOlympics account had racked up a total of 57 million likes and more than 1.8 million followers.

Kanye West to release next album exclusively on Stem Player

‘Lord of the Rings’ film and gaming rights up for sale

Starzplay expands in the Nordics

Last week, the already substantial supply of streaming services in the Nordics was expanded even further – as Lionsgate owned Starzplay entered the fray as a standalone subscription service.

Part of Starzplay’s content has already been available to Nordic consumers via a partnership with NENT Group’s Viaplay as of December last year. Among the content presented on Starzplay is original series Gaslit starring Julia Roberts and Sean Penn, The Girl from Plainville with Elle Fanning och Becoming Elizabeth – an upcoming drama series that will tell the story of teenage Elizabeth I. According to Superna Kalle, President of International Networks at Starz, local original productions might be coming to the service going forward.

In the Nordics, Starzplay is priced around EUR 5,5. 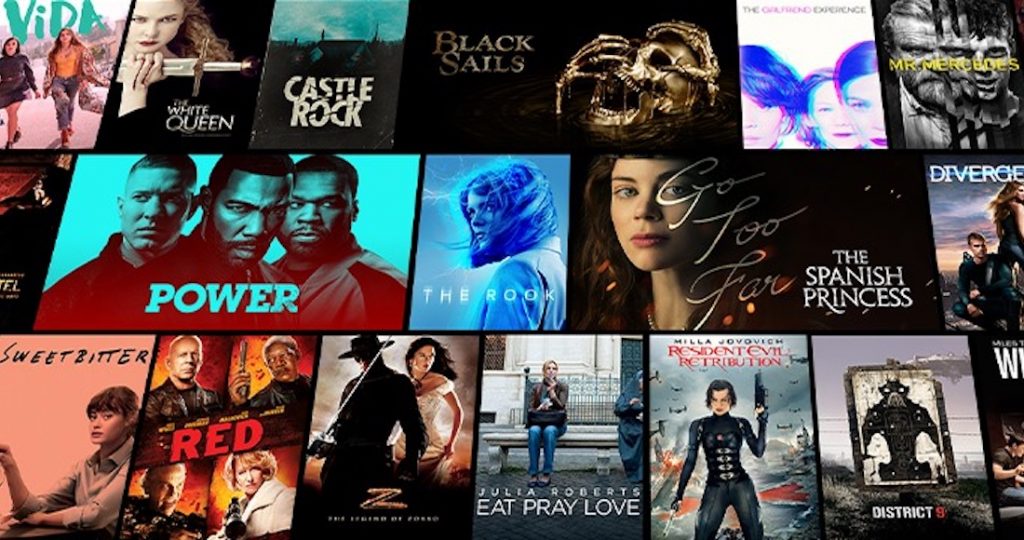